Our guest today is from Australia as you will see, and he may suffer from Chaos induced PTSD. Which would explain his love for agi teams. He fell in love with Warhammer as a kid, and used to cut models out of ruled paper to play. His niceness gave him his nickname; his skills, the respect of the Big O.
Former CCL runner-up, he already left his mark in ReBBL history by holding the record for deepest play-offs run as an Underworld team. Streamer, co-caster of Division 2 recaps, coach of the Wood Elf merry band of The Ball Pinchers :  GdayNick!

Let's start easy. How did you picked "GdayNick" as a nickname?
Ah my last usernames were some sort of play on my last name sounding similar to lemon "citruswarrior" and "drlemon" are some to give you an example, I thought they were a bit cheesy when I got older so just went with a friendly greeting and my name! With "Gday" giving a nod to me being an Aussie. 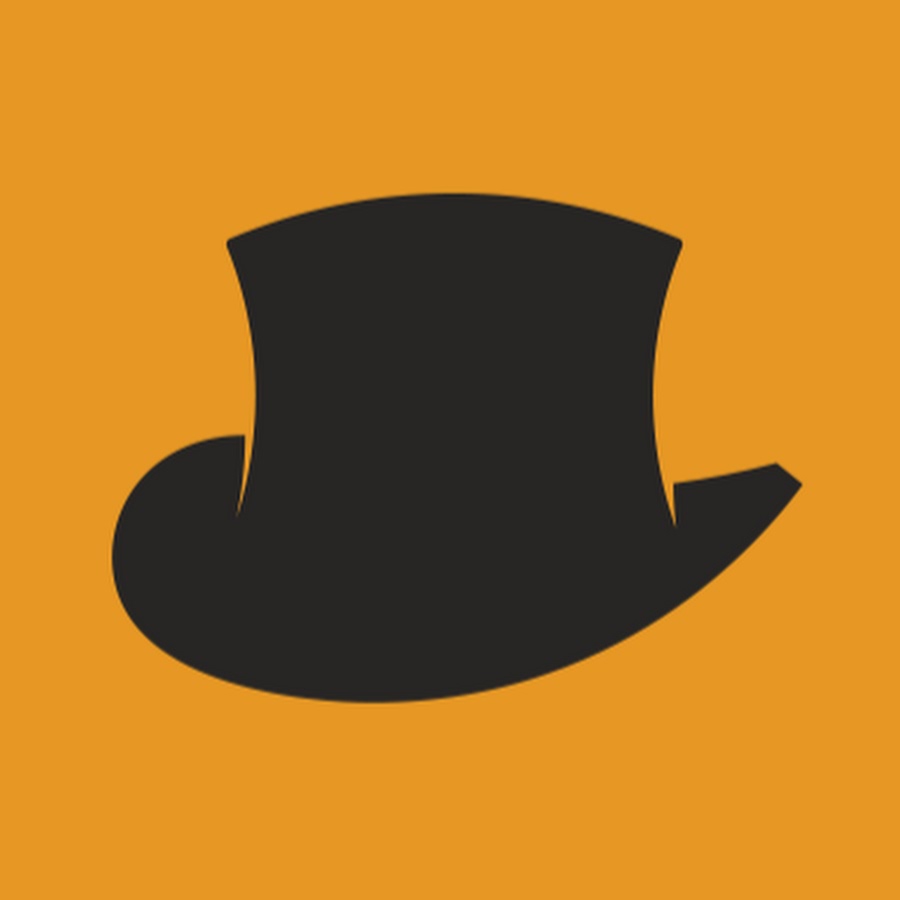 How did you became infected with Blood Bowl?
Picked up Blood Bowl 1 after seeing TotalBiscuit and some other youtubers run a league, got hooked and played lots of the ladder on Blood Bowl 1. Tried some private leagues but they were not very well run and they collapsed a couple weeks in, which initially put me off joining private leagues on BB2.

And how did you end up playing in ReBBL?
Think I end up seeing a few streams of one of the playoffs and finding out the scale of ReBBL I thought that it would have to be well run otherwise it would be a dumpster fire at this size! So I thought I would give private leagues ago again after the duds in BB1. And we got through to the end of the season! So I stuck around. In season 7 I think.

I didn't think you joined a season before me. I thought your UW team was a re-roll

Nope I haven't been around that long! But 3 seasons (going on 4) is long enough to get yourself entrenched here!

So did you know you would end up in the Big O while signing up?
Ah I had kinda browsed over the ReBBL rules at the time (was a tad long for me) but I kinda figured out that Big O was the timezone for me.

Have you been playing "Dodge reliant" teams since your first Blood Bowl steps then?

Elves were an attraction to me early on, I have had some phases of Nurgle/Orcs but have found my true love in Woodies/Rats/Stunties.

I must confess I have a hard time imagining you playing Nurgle, it seems quite opposed to your style...
Well I have done a bit of CCL with them and I played them in Clan!
But yeah have been driven away from them as however much I could kill with them I couldn't win as much as I could with agi.

You're the record holder for the longest play-offs run as an Underworld team. What's your take on this Underworld adventure in the ReBBL?
Ah I was very happy with the 3 seasons my Underworld team got through some very memorable games and successful seasons! Although my competitive nature says I would have liked to win the whole thing!

You clearly won the Big O: topping your div, making it to Round of 16 in the play-offs by stepping over Chorfs, and there is this last game of season 9 vs PapaNasty.

Yes winning Div 2 undefeated was a huge high point for the team, beating out Jape for 1st with the help of Morg! And a decent finals run with a TD Liam is sure to not forget, as he pushed my ball carrier into the endzone instead of surfing him! But all that pales a little in comparison in beating Bash Inc 3-1 and taking 2 legend scalps on the way through...

Ahhh that season 9/week 13 game versus PapaNasty. Some still cheer the glorious last game of Roger and Rikhag.

Up to this day what would you say is your proudest Blood Bowl achievement?
Ah would have to be a throw up between CCL finals performance, and killing Rodger the Rocket (Bash Inc Legendary Thrower). Not going to lie I watched the VOD of that game on Tommo's stream right after the match, haha: was buzzing to take down a mainstay of Big O lore and become a little part of it along the way!

You seem to have a nice season with your WElves up until now. Not a surprise considering you reached the CCL final with them. What are your plans for The Ball Pinchers?
Ah the whole reason I swapped to them is I want to win ReBBL! And while the Underworld gave me a great run, I thought my best chances would be with a top tier team which I was comfortable playing with. There was some thoughts on Rats but they were a tad similar to Underworld.

What about the community side of things? You've been co-casting recaps with Cynergy for a couple of seasons now. And you recently started streaming when possible as well.
Yeah the content was something I enjoyed watching when possible so I thought I would chip in on the recap side of things, and on the streaming side I don't think there have been many streamers playing a lot of agi in CCL (since Enarion) so thought I would start putting some stuff out there as well.

With that much experience in BB, what kind of coach would you say you are? And how who you define your own strengths and weaknesses? 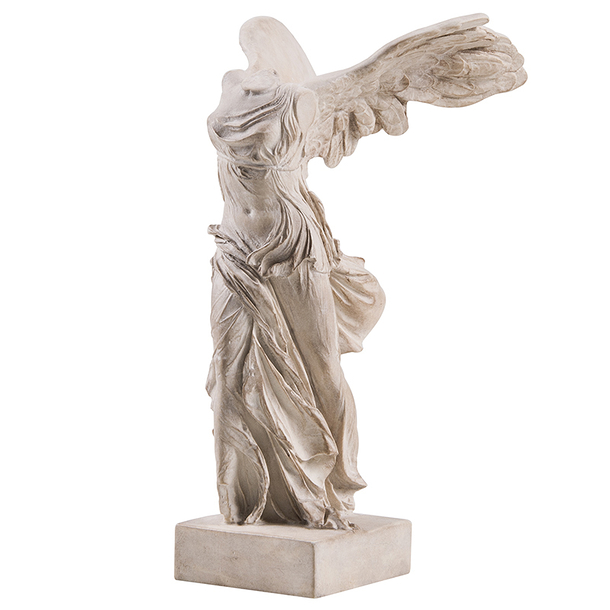 Ah, more of an aggressive coach with elves. I don't really love the elf screen for 8 turns on defence. I would prefer to roll some dice to try steal the ball!
Recently I have thought my biggest weakness is always playing for the win. Of course it is best to win but identifying when I should play for the tie and my competitive side being able to accept that I might not win are two separate challenges! Better to accept a draw on a week than get a loss which could throw off the season!
I mean finals are the time to play for the win at all costs, so that is why it is my favorite to play.

Playing for the win is one thing every week on the pitch, playing for the leader board win is another challenge altogether. That's one thing you learn by playing in a regular, competitive league. Or so I heard.

Are there any coaches around you look at for inspiration?
I like to look for more unique play styles that perform consistently and vary a bit from my own to see what I can learn from them. Morka and Enarion's extremely aggressive WE play style is something I like to watch as it is fun and helps to give me another way of looking at different board states. For more conservative play lines I think I have learnt a lot from JimmyFantastic's stream. When he was more consistently streaming it used to fit my work schedule quite well, as I had long days and tended to finish up when he was going live. Was a good way to chill out.

Which advice would you give to newer coaches trying to get better at the game?
Accept the fact that you are probably bad at the game, watch some known streamers who are good at the game: Jim/AndyDavo/theSage spring to mind. And play Orcs, I think they are the best team to learn the game with some obvious strengths, a little forgiving in ways and teaches good positioning. 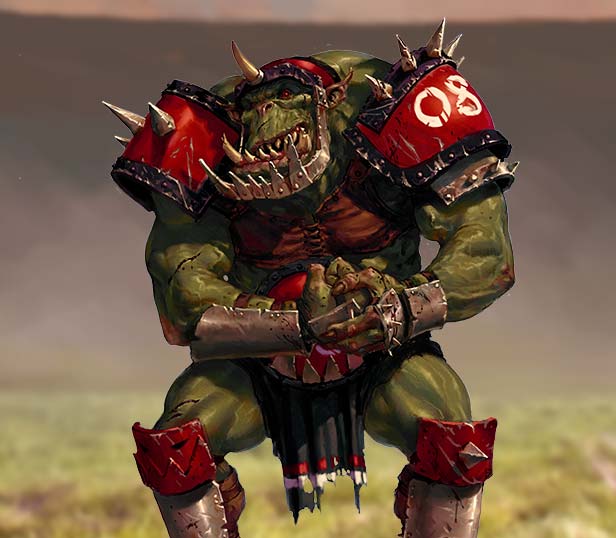 I just think too many people recommend Humans and Dark Elves when Humans are a tad less forgiving; and agi first can teach some poor habits which I had to recover from and fix my game. I think for your first team you should understand the value of STR4, Guard and a 2D block and have some fun along the way, and I think Orcs give a good space to have a positive time in BB.

Ensue discussions on the pros and cons of Humies and why they're not that suited to beginners.

Which skill gives you the most fun on the pitch?
Sidestep or Standfirm. Not giving your opponents good push options is fun and some juicy sideline plays.

Denying pushes is one of the most frustrating things in Blood Bowl. Along Vampires. And kick-off events. And dice. And ... 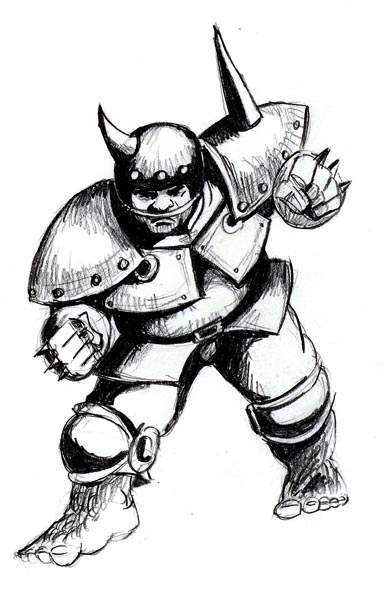 Do you have a Favorite Star player?
Puggy, no questions asked! The alpha fling himself!
I also have a soft spot for Morg after he helped me beat Jape in season 8.
Nothing quite beats styling on people with Puggy though.

Is there any kick-off event you hate with your guts?
Sweltering Heat. Which is also what the temperature has been here for the last week or so. Sweltering Heat has lost me some games against some very poor opponents.Like, you can beat someone who isn't good if the roll is a Blitz! but you can't play if you have no players...

Words of wisdom. Blood Bowl ways are strange to say the least some times.
True although that's part of the appeal for me playing board states which no one else has ever played before, and trying to find the best line a game that will never truly be solved.
I cannot overstate my sadness as a child discovering the game "Connect4" was a solved game... So having creativity in play style is fun.

Since the Heat is your enemy, is the Dome your stadium enhancement of choice?
Well I think there are certain kick offs which are worse for different teams heat is just bad for everyone at times. My simple rule is (with maybe a few exceptions here or there):
Bash: Security Gate (no Riot/Pitch Invasion)
Agi: Squig Sandwich ( no Bribe/Rock)
Stunty: Nuffles Altar (for Puggy and co)

Any snack or drink to recommend for those long BB games?
Normally eat before/after, will normally have some water on standby.

And to finish the player submitted question, Darby asked:
"If you could add a big guy to any team, which team and what type of big guy would they be?"
I would add a Ogre butcher to the Ogre team! More Big Guys can't hurt and I feel it adds that bit of fluff Ogres are missing as a team. They are part of the Warhammer Fantasy universe.
They are the wizards/chefs of the Ogre world and are quite high up the hierarchy seeing how much ogres eat meat, maybe they could have some variation on the Stab skill seeing they always have their huge meat cleavers on them!

Many thanks to GdayNick for taking on his free time to answers my questions. Once again a really fun and instructive conversation that pushed me to consider BB through another angle! Best of luck to Nick for the rest of Season X and here's to hoping seeing him reach the play-offs sooner rather than later!