Recently I retraced my steps, to see how much the interview format had evolved and which acceptable ideas I came up with, along the way. At that time I also had to pick someone to interview. You see, I try not to interview two coaches from the same division in a row, and this week was an even week. So there I was, scrolling down the division rosters when a terrible revelation hit me!

My interviewee today was playing in 1 mn Showtime for season 9, which should have made him one of the first (baker's) dozen to be interviewed. But I skipped him, and he said nothing, laying low all these weeks. But it is now reckoning time.

I consequently give you my former S9 Div3 coach, a man living a good part of his life on the road, which might explain his love for motorized Blood Bowl pieces. One of Big O's resident Dorf coaches, leader of Liverfull, RazourSharp aka Sharpy!

Where did you get your nickname from?
My surname is Sharp and everyone just started calling me Sharpy...My first name is Rhys and Sharpy is a lot better than Rhysy. There is already a Rhys here but no Sharpys.

And how long have you been playing Blood Bowl for, by now?
You want the long or short answer?
Well one of my teachers in Primary School introduced me to BB 20 (about 11-12 years old) years ago. He was painting his mini during lunch and me and a mate sat there and watched and he explained how to play, that Christmas I asked for the box game. I got Dwarfs and my mate Josh got Skaven. Those Christmas holidays we played none stop, but as we were moving into high school, I lost touch with my teacher and mate as he went to a different school. Wasn't until  I brought a laptop for work that I got back into it. Been playing for about 18 months.

You still have your minis?
Sadly no, mum chucked them when I left home. I had a supercool Deathroller mini that my teacher painted for me. I miss it.

How did you find ReBBL then?
I think it came about by watching a Sage Youtube clip, been watching him for a while then I thought I would give it a go.

And then you joined straight for Majors or went through Minors first?
I did College with Rocky and Road Warrior but my Dwarf team got destroyed so I never continued on with them. So: 1 season of College then straight into Majors.

And you joined Majors for season 8 that's it?
I took some time off after the college season then joined in season 8. I had some time away from the game as it made me salty as hell.

Why the commitment to Dorfs, is it because you started with them out of the box and see it as written in stars?
Yes I think so and when I started there wasn't a lot of Dorf teams. and they are a team people love to hate which suits me.

You're not only salty yourself, but thrive on other people's salt too?
Hahaha that's pretty much it but my salt levels have lowered, Dorf salt hasn't.

And the naming scheme, are you a long term fan of Liverpool?
Sure am, ever since Harry Kewell played for them. When I reroll, it will be a Collingwood name scheme!

You can even get the black and white stripey jersey now
Saw that, not sure on Race yet thou.

What do you have in mind for the future?
Depending on how this season goes I will most likely play another season with them. But I have been dabbling in AGI4 in CCL and I'm liking the change of pace. 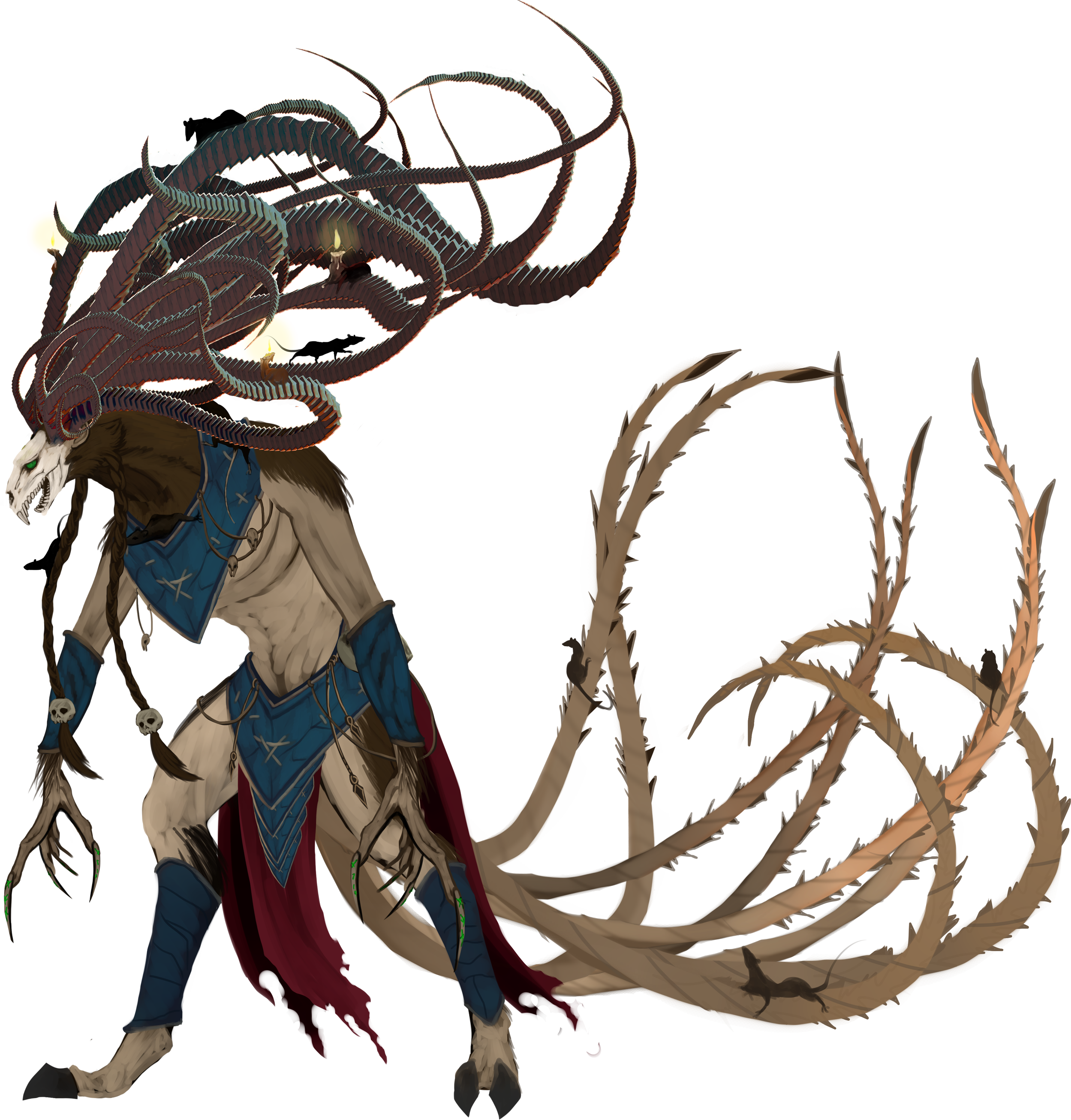 Like, what kind of agi 4: Helves, Delves, Welves, Prelves, Rats, Kislev?
I have been playing Woodies, 'cos Morka said something after our match last season that made me look at things a little differently. But I'm going to play Rats in Upstarts so I can get the Steam achievements.

Now that you've been part of ReBBL for a few seasons, do you feel interested in doing more community oriented stuff such as casting, admin-ing, news writing?
Definitely, I love the structure of RebbL, it works well. I would put my hand up for anything to help out. I'm more than happy to help behind the scenes. Will also be looking at streaming too, just need to get my gaming rig upgraded...

After your experience now, what would you say your strengths and weaknesses are?
I think my defense is my strength: my TD difference last season was close. My problem was my offence where it would be T8 and I would be 1 square away from scoring. My aim this season is to be more aware on offence. It's hard to have multiple scoring threats when you have short legs. And short arms.

Until now what is your proudest moment of Blood Bowl?
Probably this interview, can't wait to show the wife and kids.

I'm wondering, is there any coach around you look at to get better at Blood Bowl?
There is a few: Lokistar from BBLANZ is always been a big help, watching his replays, asking for advice; very good Dwarf coach. PapaNasty will always help with advice. There is also the Dorf coaches in REL that I like to watch.: UnseenWalker and oRevert.

Plugging Dorf teams being a rare event I will even go the extra mile and link you UnseenWalker's RAGE DORF and oRevert's Cogs Of War IV.

Which player skill do you have the most fun with?
Grab, it helps line up the surf. Frenzy is good too for push plays.
When I get a Grab hit I do the Scorpion voice "come here". 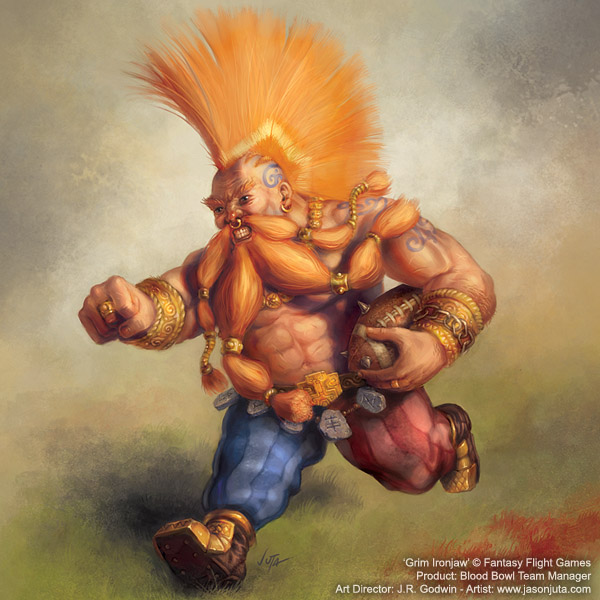 We already established your big guy fixation on Deathrollers, do you have a favorites Star Player?
Is there any others except Grim Ironjaw?

What's the kick off event you hate the most?
You should know the answer to this... Blitz. It's hard to recover from being slow, and if opponent positions well, I can't get the ball in time.

Let's say in our only regular game so far I was lucky enough to get a Blitz! turn 0, and Sharpy rolled a quad skull on his third action just after. Which led me to score a defensive TD on turn 1 with Zons... He then massacred my Humies in 1mn Showtime a week later. We're square in my book.

What do you recommend as a drink or a snack for the long BB games?
Depending on the night of the match, if I'm playing Friday or Saturday night, I usually have 2x 500ml bottle of Belgian Bombshell from my local brewery and some chocolate. During the week it's water and M'M's.

For those interested about that local brewery, Sharpy provided a link to Bandicoot Brewing.

Which one would you say is the most difficult: being a dad, your job, enduring BB?
Tough question but I would have to say being a dad: my job and BB are constant but my kids are always changing, which means I need to adapt to catch up. But my 6 year old has a interest in BB already which I'm happy with! Better then Fortnite... not that he plays that, but I would rather him be a kid playing with figurines than Fornite.

Ok to finish I have a question from my previous interviewee, Jamus: "When do you reroll to Skavens? I need company." Not joking, it's a sign Sharpy!
Lol really?  I was going to say 2 seasons after he retires the team, so I can get Hihyk off the market from him. I will see how my upstart Skaven go. And I was going to name my upstart team after Jamus...
Wow that's thrown me.

My thanks to Sharpy for waiting this long to be interviewed while he should have been part of the first batch. And he went reading them, hearing me talk about my interviewing schedule and said nothing... I hope this present interview will make an acceptable apology for the delay !