Did you know?  - By Larkstar

The birth of “sacking” a ball carrier is most often credited to Deacon Jones, a former Defensive End from the Los Angeles Rams of the NFL.  Jones equated the “devastation” of taking down the Quaterback behind the line of scrimmage to the chaos and destruction that accompanied the “sacking” of a city.  The ability to “sack” a Quaterback often results in substantial gains for both the team and the player, as Defensive Ends are among the highest paid positions on a Football team with 17 players earning more than $10 million per season.  The record for most sacks in a career is held by Bruce Smith (Bills, Redskins), who racked up 200 devastations!

The 3rd most brutal sacking of all time occurred in the city of Carthage between 149 - 146 BC with over 460,000 people killed.  The three year siege culminated in 50,000 survivors being sold into slavery and every last building razed to the ground.  Rumors abound the Romans, once their pillage was complete, salted the earth around Carthage to prevent life from ever returning, thus being first to invent the meme.  Though no direct evidence exists, believing it to be so is vital to this article… so let’s just go with it!

Salting the earth, or sowing with salt, is commonly associated with madness and lunacy, originating in a ruse attempted by Odysseus to avoid his inclusion in the Trojan War, hoping the act of using salt as fertilizer would prove his insanity to onlookers.  Odysseus’s further exploits paint a portrait of a lost and confused sailor who took 10 years to find his way home!  I.E., score! *wink wink, nudge nudge*

So remember, your team Sacker is the ultimate key to Devastating your opponent to the point of engulfing them with Salt, causing the onset of Madness, and leaving them Lost and Confused with their inability to Score!  Seriously people, I can’t even make this stuff up!  Happy Sacking! 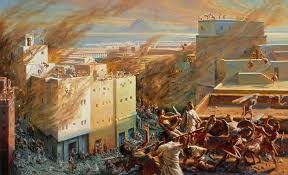