Mutant of the Week: Christmas Fruitcake  - By Schlice

It appears that Santa was not quite listening attentively when we put in our list this year. The requested wealth must have been misheard as WElf, because the Less Useful Mutants headed into the Christmas break with a match against the leafy leapers of the Wood Land Warriors. Not all of the players were full of festive cheer however, as the star of this week's report has been struggling with poor form in the team's matches to date. Could it all be turned around in some kind of Christmas miracle? Let's meet the Chaos Warrior fruitless and find out.

fruitless is a regulatory gene that helps to control sex-secific development and behaviour in flies. It is required for the correct development of a large male-specific muscle in the abdomen and is also expressed in the brain where it helps to regulate courtship and mating. Courting in flies is a complex process, in which a male fly goes through a number of steps including walking after a female fly, tapping her abdomen with his forelegs, 'singing' a song by vibrating his wings and licking her abdomen before attempting to mate.

In fruitless mutants however, this process all goes a little awry. Without the usual regulation of fruitless in the brain courtship behaviours become a little misdirected, with some mutants trying to court indiscriminantly, while others strictly court male flies. This can lead to a phenomenon called 'chaining' where a fly attempts to court another male, and is then courted himself by a new male, who is then courted by another...  This behaviour led to the initial name of this gene, fruity, but this was deemed to be perhaps a little inappropriate and renamed to fruitless in the 70s.

This renaming highlights a second feature of fruitless mutants. Since they have defective development of the male-specific abdominal muscle, they are unable to curl their abdomen to mate correctly. So even though they go through the motions of courting (if somewhat indiscriminantly), they are incapable of actually sealing the deal. All the effort, no payoff. A fruitless endeavour indeed. 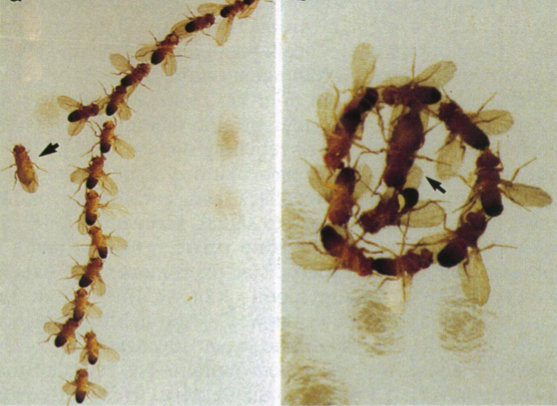 It's fruitless all the way down!

fruitless was feeling a little down in the lead up to this week. He knew that his teammates didn't really care what went on in his private life, but when you feel like you're letting the team down even friendly locker room banter can wear thin. And fruitless definitely felt like he had been letting the team down so far. Having played eight games with the team so far, fruitless found himself stuck in a rut of feeling like he wasn't really contributing in matches but also being unable to develop and learn new skills to start making an impact on games. All the other Chaos Warriors on the team would sit around after each match and discuss the new tips and tricks they had picked up, but it never seemed to do fruitless any good.

Having finally had enough, he resolved that this would be the week to turn it all around. fruitless threw himself headlong into training. The rest of the team could see the determination in his eyes as fruitless set up for drill after drill. They also couldn't help but notice that the team's punching bag had mysteriously been adorned with pointy ears and grass shorts one night. Match day finally arrived and fruitless took to the pitch with a keen sense of purpose to finally start justifying his place in the team.

It was always going to be a tough matchup for the Mutants, with those annoying wood elves bouncing around all over the shop and able to knock the ball loose from the tightest defensive position. And so it was early on in the first half, with a Wardancer vaulting the defensive line to strip the ball away from the arms of shaven baby. As the ball ricocched around the tightly parked scrum, fruitless spotted his chance. Managing to snag it out of mid air amidst heavy traffic, he tucked it under his arm and started barrelling towards the endzone. 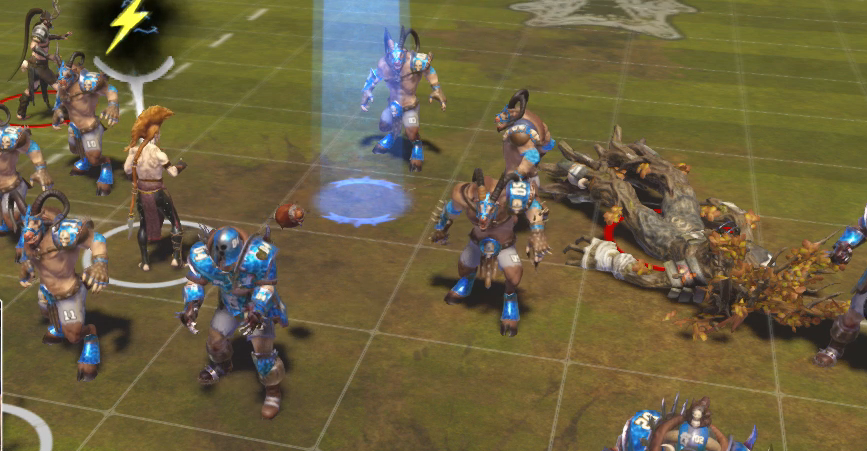 All that training finally starting to pay off! 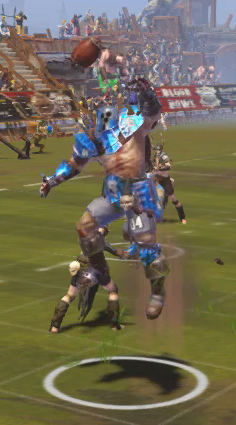 With fruitless catching the elves by surprise with the sudden display of skill, the rest of the Mutants quickly scrambled to break free and provide support. Finding themselves inexplicably on the wrong side of the play, the elves all scrambled to get back and set up some form of defence. Thanks to their superior speed, the elves managed to catch the breakaway a short distance from the endzone. Unperturbed by the superior strength of fruitless, the Wardancer again leapt in and managed to knock it from the warrior's hands. Capitalising on the loose ball, the other Wardancer darted in to sweep it up and back out again to make some space. Sensing the chance for a quick counter attack, the dancer lofted a pass downfield to a waiting elf ready to run off with it. Not wanting to be denied his chance however, fruitless summoned all his strength and astonished everyone with a gigantic leap to pluck the pass out of the air.

Realising that it was futile to try and stall for time with how easily the elves could break in and steal the ball, fruitless decided to just run the ball in and secure the touchdown he had worked so hard for. Sadly, this left the elves enough time to return the favour, tying it up going into half time.

The second half started a bit slowly, with the elves content to sit back with the ball while probing at the defences to find a weak spot. The Mutants held a strong core, letting the elves dance back and forth between the wings but not allowing them to break through. Suddenly, a signal went up from the wood elf thrower and the elves turned in unison, wrong footing their defenders and pouring through the gaps. Somewhat astonishingly though, this break had left fruitless unmarked and just within reach of the thrower. He screamed forwards and, at the limits of his endurance, threw himself at the ball carrier sending them both tumbling to the ground.

The thrower, feeling a little rattled by the unexpected 300 pounds of warrior getting up in his face, managed to recover the ball, but decided to quickly dump it down the field to where the rest of the team could protect it. Inspired by fruitless' actions in the first half, the warrior tinman attempted to repeat the feat. Managing to overcome his busted leg, tinman sailed through the air to intercept the pass and break the spirit of the elves. With the turnover leading to some very open and flowing play the speed and agility of the elves nearly allowed them to recover and push for the win but somehow it ended up in the hands of shaven baby who carried it over the line as the final siren sounded.

Out-elfing the elf teams is always satisfying, and this match was no exception. Two interceptions is going to ruin pretty much any team's day and the caught scatter just added insult to injury. Poor Haz had a few other failures at critical times that turned what was looking like an easy win into a loss.

Despite the outcome however, the team really struggled against the wood elves. Without any way of consistently knocking them down or removing them, we were constantly pressured by the threat of the Wardancers and forced into an early score. Definitely going to need a bit of help to cope against the repeat matchup next round when the Mutants face Gdaynick's Ball Pinchers. Although finally managing to get block on all my warriors will hopefully start bringing a bit of consistency to the team.

Fun fact learned while researching this week's report: The courtship song that male flies sing is more effective if they have learned it from another fly. So very young males will release similar pheremones to females, encouraging other males to court them. From this, they pick up how to sing the courtship song and are then more successful at mating later in life.