Mutant of the Week: Heartbreaking  - By Schlice

This week, the Less Useful Mutants overcame their general incompetence and finally managed to score on their own offensive drive! 🎉 That's right, they have now attained the barest minimum standard to be considered a proper, functioning blood bowl team. In order to achieve this feat however, their entire gameplan had to be revised. Rather than getting into a scrum in the middle of the pitch and trying to grind their way towards the endzone, this week's training revolved around rushing as fast as possible down the pitch to ensure the ball was within easy scoring range.

Of course, coming up against the reprehensible dark elves of r/theredpill it couldn't all be about scoring fast, scoring often. In recognition of the fact that these elves deserve a good punching, the Mutants were merely asked to refrain from violence for a short time while they worked to rush the ball downfield. Once a safe scoring position had been secured however, they were given free reign to provide a clip behind the pointy ears of any elf who looked like they needed to be taught a bit of respect.

This sudden focus on speed was a most unwelcome change for one member of the team, who was drawn to blood bowl because of the lack of physical exertion it required relative to some other sports. So without further ado, let's meet the focus of today's report, the Chaos Warrior tinman. 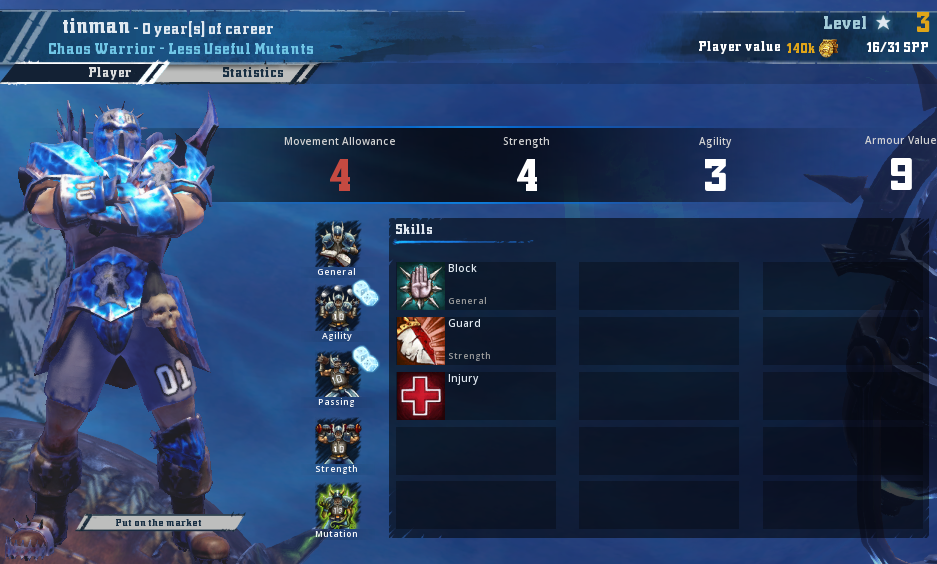 tinman is another regulatory gene (Why so many on the team? Because messing with regulatory genes often have quite drastic mutant effects as they are responsible for coordinating the effects of many other genes) that is expressed early on in fruit fly development —around 4-6 hours after fertilisation. It is believed to be one of the first steps of defining which embryonic cells will go on to become heart tissue, by activating the expression of a range of genes necessary for heart growth. It is therefore obvious (I hope) that in tinman mutants not expressing the gene, there can be no activation of these later genes, leading to flies that fail to develop a heart. 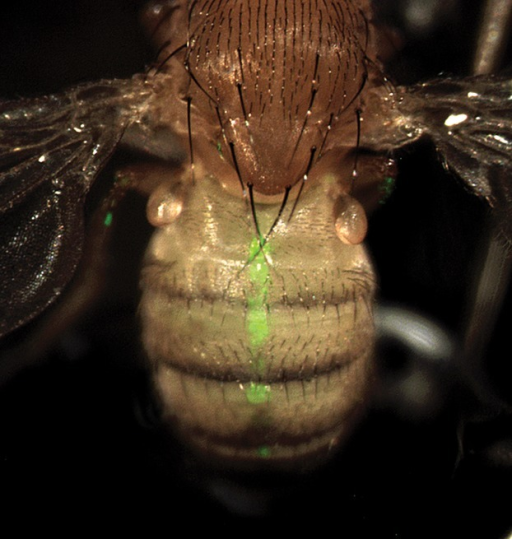 Left: Fluorescently labelled expression pattern of the tinman gene, showing the location of the adult heart. Given the shape I wonder whether Drosophila love letters are less ❤️ and more 🐍. Right: Normal (A) and tinman (B) embryos stained for proteins observed in the developing heart. Note the lack of any heart tissue along the top of the tinman mutant

Obviously for the flies this does not turn out well. For our purposes however, we will stick more closely to the source material which suggest it could be perfectly possible for such a mutant to be wandering around the pitch in shiny armour...

tinman was most displeased with the change in team tactics leading up to this week's match. Without a functioning heart, any vigorous activity quickly left him gasping for breath with severe chest pains. Despite these limitations he threw himself into the week's training, managing to halve his 50m sprint times from four to two minutes. Realising that this was still not enough to keep up with the rest of the team, tinman made sure that he was positioned right up against the line of scrimmage as the first half kicked off to reduce the distance he would have to cover to reach the endzone. As the whistle blew he eagerly threw himself forward hoping to at least provide a useful body to block off the elves from getting close to the ball carrier.

All the good intentions in the world can't overcome physical limitations however, and after a very short while tinman was struggling. Spotting a dark elf standing nearby, he came up with a plan to look like he was helping the team out while still getting a bit of a break. Wrapping his arms around the elf he made it look like he was trying to throw a block, when really he was just using the elf to support his weight and catch his breath. After dragging the elf vaguely in the direction of the endzone for a while, tinman called to his teammates to push into the space he had created. Staring through a wall of elves to view the struggling warrior, his teammates just laughed and continued pushing down the opposite flank. 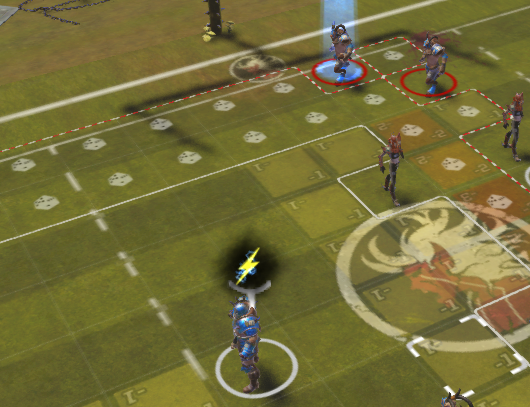 Realising that his teammates were on to the ruse, tinman resolved to actually try and help out. Having recovered slightly from his initial exertion he was able to take a breath and survey the state of the field. The team had executed their gameplan well enough and had pressed right up to the endzone but there weren't enough players left to adequately protect the ball carrier from the dark elves. Gritting his teeth, tinman pushed his support elf away and dashed towards the ball. Halfway there and with chest pounding and vision starting to blur, he knew that he couldn't make it far enough. Rather than pushing it too far and ending up crashing to the floor tinman desparately searched for an alternative. Seeing an opponent in the way he pulled up short and leant heavily on the elf gulping for air. While not quite in perfect position to prevent access to the ball carrier, tinman hoped he would be enough of an impediment to help the team hold on. 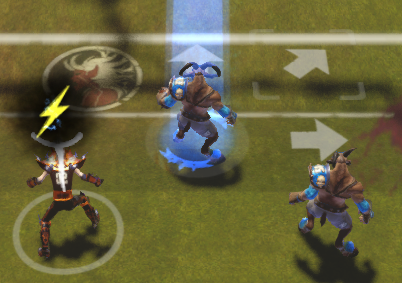 Of course, in his weakened state it was relatively easy for the dark elves to knock tinman flat on his back, leaving an open shot on the ball. As the dark elf blitzer came screaming in for the sack, the ball carrier shaven baby tucked the ball up and held on for dear life. Unable to spill the ball free, the blitzer was left with a dilemma, force shaven baby into the endzone to concede the score and try for a quick counter, or keep him inbounds and hope to cause a turnover later. Remembering whispered stories of the fate of last player to give up an unnecessary touchdown for one of coach liamcoulston's previous teams, the blitzer took the safer option of keeping the drive going. This choice was not without personal cost however, as the blitzer was very quickly pushed into the loving embrace of the crowd as the Less Useful Mutants established a tighter control of the pitch. Having flawlessly (in their own minds at least) excecuted the gameplan, the Mutants ran in the touchdown in the dying moments of the half and let the celebrations begin.

This was certainly a game to learn why bash coaches hate playing agi teams. An entire half with nothing but pushing elves around and any slight positioning error quickly ending up with a swarm of elves pressuring the ball. We really don't have the skills yet to play the aggressive style I'm hoping for, so I guess it will be back to the passive cage-and-grind style against the Wood Land Warriors next week. Still, we managed to score on our own drive this game, which counts as a massive win in my book given how the first few matches have turned out.

Of course, Nuffle can never let you just enjoy a success without some form of counterbalance. And so it was that the Mutants were denied the chance to repeat the feat in the second half, costing them the game in the process. After the Dark Elves elected to score in four turns, the team seized the opportunity to try and score in half the time for an unlikely victory. Starting off on the backfoot as the elves again took advantage of a too open defensive screen to pressure the ball early, the Mutants recovered to get the ball to the halfway line with two turns to go. Rather than sit tucked up in midfield, the team elected to press on and send multiple scoring threats forward in the dying moments of the match. This exposed the ball carrier partially, but the greater chance of victory was prioritised over playing safe and ending with an inevitable, boring draw. Sadly, the elves then showed why you should never count them out, with a sequence of dodges, a one die sack, perfect scatter, more dodges and a recovery (in tacklezones), pass, catch and GFIs (just for good measure) turned what should have been a draw at least into a disappointing loss.

Not the most unlikely sequence of events anyone has seen out on the pitch, perhaps. But still never a good feeling when you're on the receiving end. I would hereby like to apologise to XS and all those who have suffered a similar fate at the hands of the Ratfuckers in previous seasons. All in all though a well deserved victory to the elves and I'll look forward to the rematch in the second half of the season when I have had time to acquire some more tackle.