Mutant of the Week: Oh the Humanity!  - By Schlice

After struggling last week against the pressure that an aggressive Wood Elf team can apply, it was clear that a new strategy was required for the repeat matchup against The Ball Pinchers. I mean, it's right there in the name. They will be trying to nick in and out while nabbing the ball with a quick tickle somewhere inbetween. Unfortunately, several days of planning sessions left the team management no clearer on what they could do to cope. It was obvious that the team didn't have the expertise or equipment to handle the slippery elves, and so a call was put in to the human lab down the road to see if they were interested in a collaboration.

Due to difficulties in getting a correctly signed Material Transfer Agreement, there wasn't enough time to actually learn how to use the other lab's tools and techniques. And so on matchday a member of the collaborator's lab turned up to provide a spot of on-the-job training. Since it may be the only time he actually takes the field for the Mutants, it seems appropriate that MAX is the focus of this week's report. 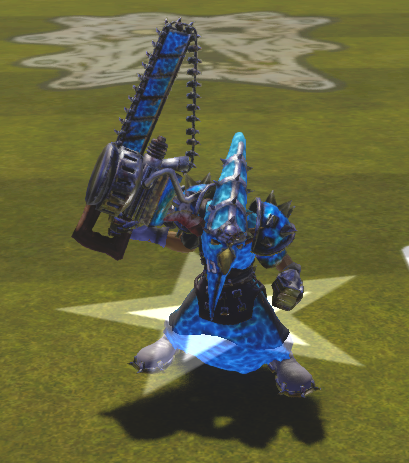 MAX is a human gene that is necessary for a number of other regulatory genes to function. It's name is a shortening of MYC Associated Factor X (yes, they actually named it 'unknown thing that interacts with this other thing'; human geneticists are no fun) because it was first identified as being necessary for the proper functioning of the MYC gene that regulates cell growth and proliferation pathways. MYC and MAX proteins bind to each other  and help to target the MYC protein to the correct regions of DNA where it can activate genes required for cell growth. When MYC gets expressed incorrectly cells grow and proliferate in an uncontrolled fashion, in other words, it causes cancer.

And if this short summary bores you, please spare a thought for the poor people who have to sit through seemingly endless lectures and seminars on the topic. Apparently if you can spin your research as 'curing cancer' you are no longer required to make it interesting when presenting to your colleagues.

Seriously. Imagine spending your time with this and 200 slides just like it...

I was nearly ready to give the human researchers some credit though. One of the other proteins that MAX can interact with behaves in the opposite way to MYC. When this protein binds with MAX it prevents cell proliferation pathways from being activated, acting as what is called a tumour suppressor gene. This other protein is known as the MAX Dimerisation Protein, or MAD Protein. I know, I know, still a pretty boring name. But the MAD-MAX complex acting as a tumour suppressor is definitely some imagery I can get behind.

Unfortunately for those of us who like fun, the official gene name is actually MXD1. MXD1-MAX doesn't quite have the same ring to it does it?

Having turned up for the match at the last minute, MAX had no chance to practice with the team and get any cohesive tactics together. Eying the dangerous piece of equipment agressively whirring away, the coach decided to not risk injury to his players with anything complicated and gave MAX strict instructions to play it safe. "Just stand there and warn off any elf that comes within ten metres of the ball".

These instructions left MAX quite confused, as his usual involvement was decidedly more full contact. Nevertheless he decided to embrace the role, leaning in to the more theatrical elements of the sport with menacing glares, maniacal cackles, and suggestive eyebrow waggles all on display. The unconventional tactics did seem to have an effect on the elves. Rather than the aerial assault of the previous week their defence was  more restrained, with only the occasional speculative foray in to try and extract the ball. Even these attempts were somewhat cautions with the nervous elves keeping one eye on the ball and one eye on weirdo with the chainsaw at all times. MAX's effort gave the rest of the team the breathing room they needed and the Mutants slowly pressed the ball down the field to score. 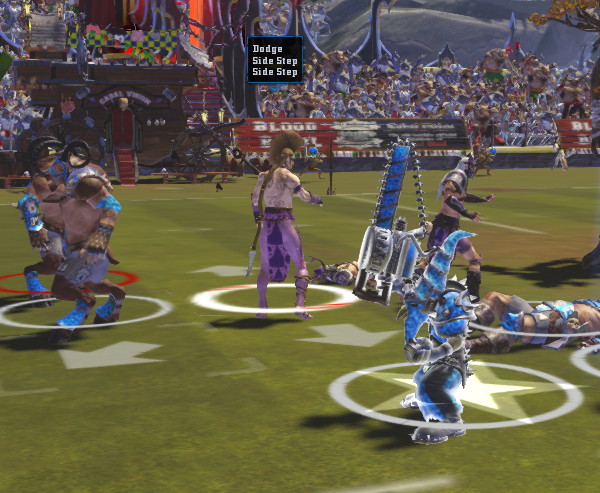 Please, step closer and say hello to my little friend.

Unfortunately, the referee was finally forced into action after protestations from the elf coach. MAX was ejected from the match with his job half done. He was later heard commenting to the other players on the bench that it might have been an odd assignment today, but the pay is just as good and he had a great time completing it. Makes the uniform a bit easier to clean after the match as well.

Without their secret weapon, the Mutants now had to deal with the elves on their own. Expecting an attempt at a quick counterscore before half time the team gathered in a huddle to work out how to prevent the much faster elves from tying it up. Lofting the kickoff high into the air above the line of scrimmage, the team managed to get it lodged in the boughs of JOHN CEDAR, The Ball Pinchers' Treeman. By the time one of the nimble catchers had shimmied up the trunk to retrieve it the whistle had gone and the Mutants went into half time with a 1-0 lead.

This was a tremendously fun match to play. I've seen enough bits and pieces of Gdaynick's streams to have a decent idea of his style and knew that his team would be tough to deal with. I'm a firm believer in planning your turns with the assumption that all your block dice will be pushes, so all the blodgestepping elves were always going to be a problem. Add in those nasty leaping Wardancers and you have a rough matchup for early Chaos with no tackle.

Having listened back to the stream, I know there weren't many people on board with the idea. But this is where the plan of using the chainsaw to force more cautious play from the elves came from. With the freedom to stall out the half, a few lucky removals along the way would have left us well placed for either a draw or the 2-1 grind. Unfortunately, it didn't quite turn out that way. The first half stall was successful, but we instead ended up in the Wood Elf version of the 2-1 grind, with a quick score and a steal and score in the second half. I guess next time we'll just have to get the chainsaw more involved and hope the dice are with us ;)

Before ending this report however, it seems a shame to not make a slight digression and talk about the awkward one turn attempt at the end of the first half. Without wanting to stray too far into other people's turf, it's a fun little challenge and I'd be interested to see how other people would solve it. The scenario is as follows: you are playing wood elves and have set up for pretty standard one turn. A sidestep catcher means getting the two pushes to be in range should be relatively simple until disaster strikes and your treeman catches the kickoff. The treeman was supposed to provide the second block to get you in range so now your plans are in disarray. We pich up the action with the Treeman successfully handing off to the intended one turn threat. Review the pitch situation below, set yourself a three minute timer (need to leave enough time to execute it), and work out how to score. 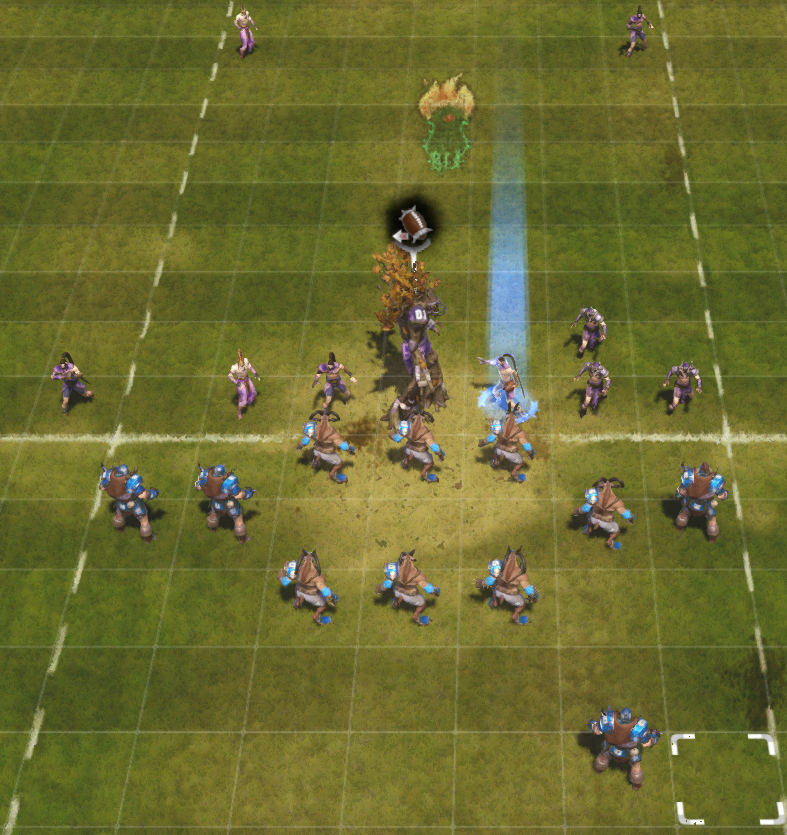 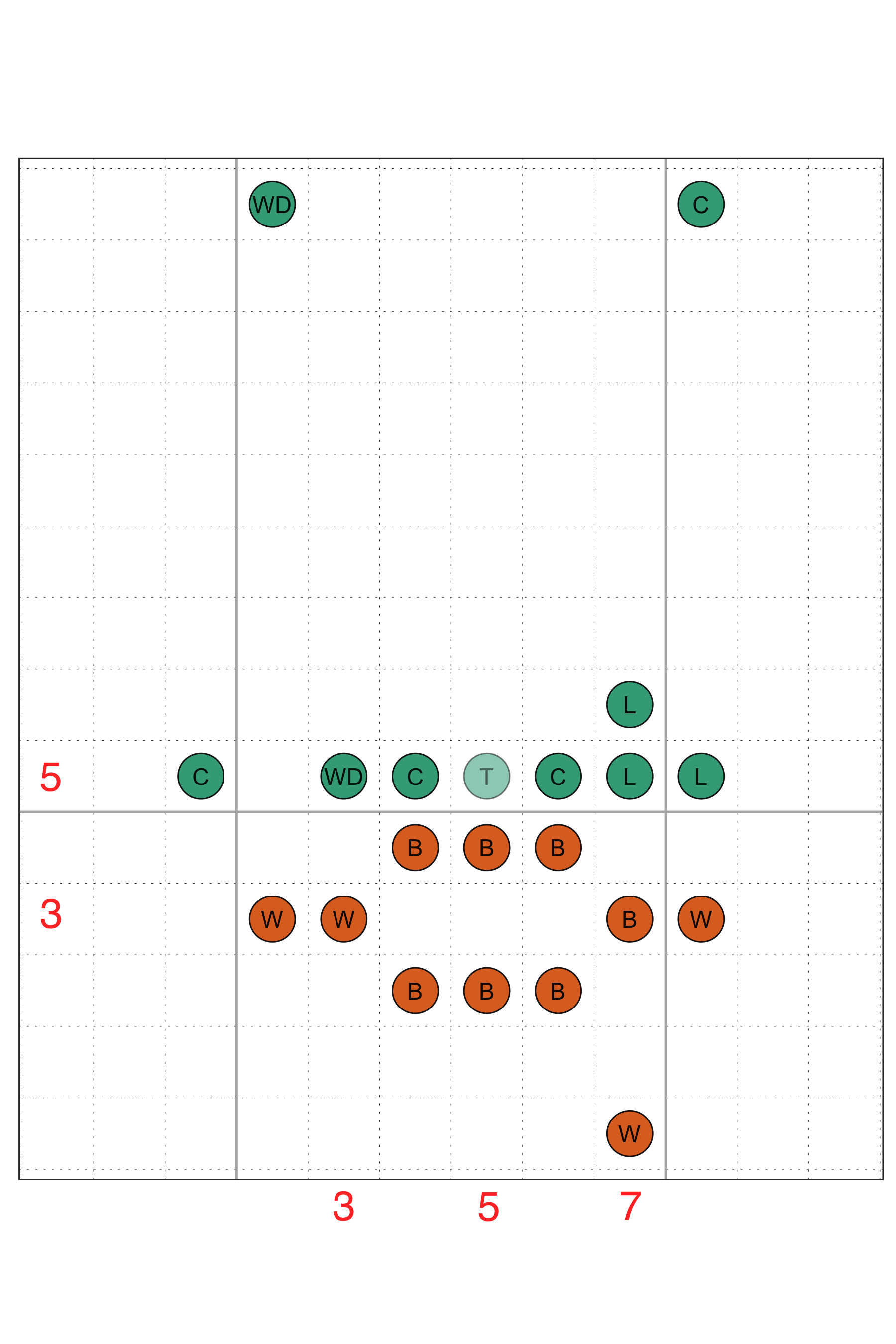 Potentially relevant additional skills: Catcher to the left of the tree has AG5/Guard, Catcher with the ball has sidestep, Lineman to his right has MV6.

How did you do? The solution I came up with in three minutes was:

Or, to see it in action:

The key for me was realising that sidestep on the ball carrier was a distraction, because stepping down and to the right makes it impossible to get a second block off. Once you realise that you have to do it the hard way, it's just a matter of making sure all the pieces are in place ahead of time to block squares off. I make the line of play above out to be nearly a 1/4 chance of scoring (24.6%), which it not too shabby at all given the starting position.

Can you do any better?