Mutant of the Week: One for the Road  - By Schlice

Despite protestations from coach Rhys of That's Chaos Theory that it is all completely natural and that life just finds a way, whenever you see a ST3 skink running around on the pitch you can be assured that there is a highly advanced genetic engineering project behind it. Feeling slightly underresourced against the superior research program of the dinos, the Less Useful Mutants decided to seek out a sponsor to help fund their own efforts. After contacting several reputable (and a few otherwise) businesses the team management eventually settled on a proposal from Bloodweiser to support the team because not only did they provide much needed funding to cover the team's research, they also offered free product samples! Unfortunately, in accepting the offer, team management had forgotten to consider the effect it might have on certain team members. Which brings us to today's featured mutant, the beastman cheap date. 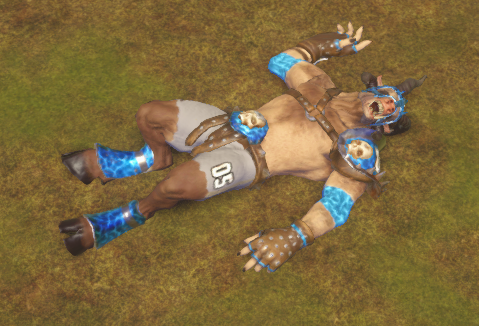 cheap date is a gene (technically an allele — variant form — of the amnesiac gene) involved in dopamine signalling in the fly brain. Specifically, it helps regulate the cAMP signalling pathway which is necessary for memory/learning behaviour (hence the amnesiac name), but also for alcohol tolerance. cheap date mutants do not show the expected increase in cAMP levels after being exposed to alcohol and therefore are far more susceptible to it's effects.

In case you were wondering, drunk flies behave remarkably similarly to humans. After exposure to a sufficient quantity of booze, they become very sedate and eventually lose the ability to remain standing. In the lab, this is tested with a device called an inebriometer. Essentially they chuck a handful of flies in the top of a giant dice tower (not even joking) and pump in ethanol vapour. Eventually the flies are overcome and are recorded as they tumble out the bottom. Normal flies take around 20 minutes to get legless with a roughly 50/50 ethanol/air mix while cheap date flies are shitfaced 15 minutes in. 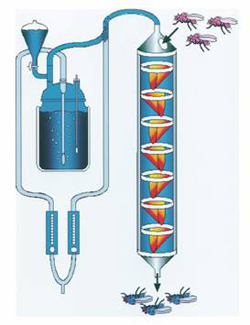 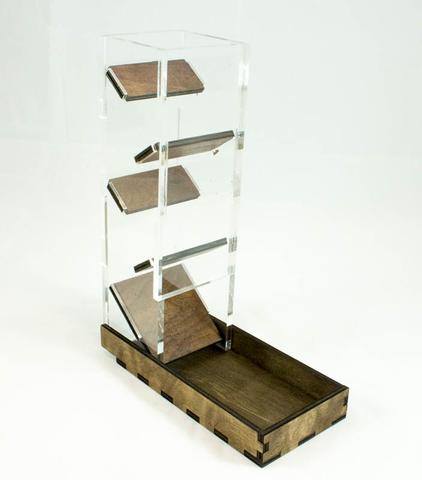 Seriously, can you tell the difference?

As they ran out onto the pitch, the rest of the team couldn't help but be a little worried about cheap date. Suffering  from the effects of the sponsor's pre-game event, he was unsteady on his feet and slurring words. Still, there wasn't a whole lot anyone could do. After a rough time last game, and having to throw a uniform on a passing tourist just to make up the numbers this week, it wasn't like they could even leave him on the bench for a half to dry out. Instead, they hoped that he could keep it together long enough to distract the opponent while the rest of the team got to work.

This game plan started out well enough, with cheap date stumbling off up the pitch and the opponent sending a saurus over to keep an eye on him. After sizing up the much larger opponent, the thought came whispering through cheap date's mind (common to drunks outside pubs around the world): "I could take him". The one teammate in support could not hold cheap date back from throwing himself at the marking player in an ungainly manner that only served to knock them both off their feet. Being much more in control of himself than the attacking beastman, the saurus was easily able to break his fall with cheap date's body, leaving the beastmen writhing on the floor wondering how it had all gone so wrong. 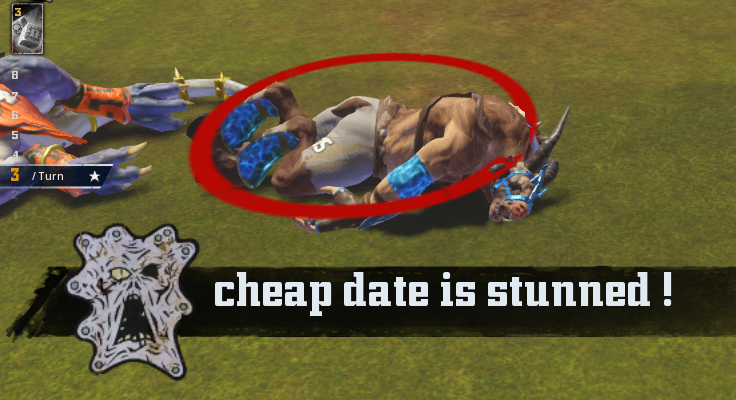 If you drink and block, you're a bloody idiot.

Having now realised that he was no threat, the opposition decided to give cheap date a wide berth. However he still had a chance to have an impact on the game. His rambling walk somehow left him in contact with the star skink of That's Chaos Theory. Finally seeing someone he could bully properly, cheap date roared incoherently and threw himself at the abomination. Despite clearly being in a position to just push the skink out of the way, cheap date again elected the crash tackle option, sending them both sprawling to the ground and leaving the skink stunned. Accident, trying to do the right thing for the team, or just a drunken rage that wanted to see blood on the pitch? We will never know, as cheap date admitted in a post-game interview that he couldn't remember the event... or the rest of the match... or much of the last three days.

It was a nice change to finally face a team with fewer skills than the Mutants. The omnipresent threat of failure all around made for a tense and exciting match. We got lucky on our offensive drive by removing the block kroxigor early in the half. But poor ball protection and skinks doing skinky things lead to a turnover and threat of a counter score. Some desparation plays allowed us to recover the ball and press up the field to be in a position to score. The opportunity was cut cruelly short however with, as is tradition, a 1/81 turnover trying to blitz a player off the scoring threat. Thus, the Less Useful Mutants continue their 100% record at failing to score on their own drive.

Being up a few players for the second half (and having only two skinks to worry about) meant that we could just base up all the saurus and wait for the inevitable failed roll. While the skinks did manage to break though the defensive line, without any support it was easy enough to pick them off and recover the ball. From there it was just a matter of keeping everyone tied down while the free players escorted the ball the length of the field. Despite the risk of throwing the game, we elected to hand off to a Chaos Warrior for the score on the final turn. While it would have been heartbreaking to tie yet another match on a last second failure, rushing block on as many people as possible seems like a good choice with players as accident prone as these.

Apart from the on-field mishaps, the team is shaping up well. With a healthy list of 12 players, we now have enough cash to start looking at opportunities for stadium enhancements. While all options are on the table, given the effect a mere sponsor has had on some players I doubt we will end up selecting a Beer Stand to be present on the sidelines of our home games :)