Mutant of the Week: Playing with Dolls  - By Schlice

Before getting started on the report this week, I'd like to take the time to give a shout out to the hero of last week's column — stoned — and his committment to the theme of useless mutants. After electing to take the riskier path of claw before block, stoned was given strict instructions to stop rolling skulls and both downs all the time. Unfortunately stoned might have taken the instructions a bit too literally. While setting up for the kickoff one thing was going through his mind: "don't roll a skull and both down ... don't roll a skull and both down". Lining up a tasty blitz on an opposing player, stoned screamed in for the hit.

While lying stunned on the pitch in the ensuing turns, stoned could be heard muttering "He never said anything about two skulls".

But let us now turn to the actual mutant to be featured this week, the Chaos Warrior ken and barbie.

ken and barbie is a transcription factor gene, which means that it interacts with DNA to control and regulate the expression of other genes. In this case, ken and barbie is expressed in the embryonic genitals of flies to drive the development of various structures. ken and barbie mutants develop internally just fine but externally, well you can probably guess from the name. 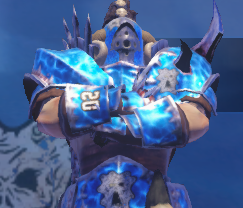 Image cropped to the waist at ken and barbie's request

ken and barbie has had a largely inauspicious start in the team, generally puddling around the pitch without much to show for it. His time to shine came very late in the first half against Rocky Road to Redemption. With the ball carrier bogged down in sight of the endzone and the clock ticking down, the team was running out of options. 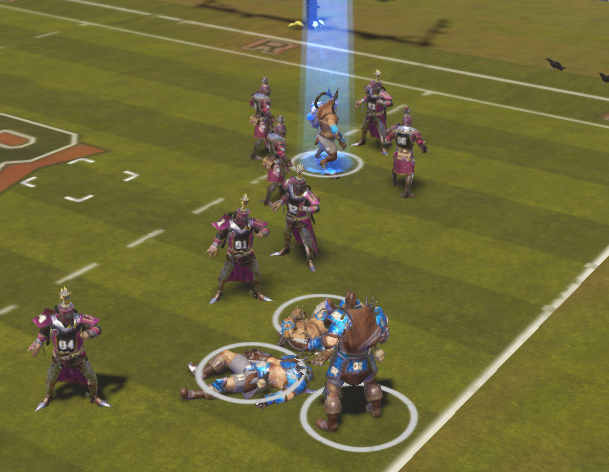 Against a staggering array of opposing players, ken and barbie realised that he was the only player around to lend some assistance. Running some quick calculations, ken and barbie realised that the best chance of a score was to throw his massive bulk against the scrum that had developed. Hoping that he could jostle his teammate into a position to dodge free and get the touchdown.

After recovering well from stoned's initial screwup to stabilise the drive, the team were in despair at the possibility of coming so close and yet so far. Their only consolation seeing that it was ken and barbie thundering into contact was that at least it was anatomically impossible for him to fuck this up.

And thus did the Less Useful Mutants continue their streak of failing at scoring on their own offensive drive.

The game as a whole was very evenly balanced, with the raw stats of the Chaos team matching up against the starting skills of the Bretonnians. To counter the removal threat of the claw/MB stoned, Rocky induced a DP lineman to get his stopming boots on. Neither team managed to get the upper hand in the brawling, leading to both drives stalling out near the line of scrimmage until late in each half.

Whlie you have already seen the eventual outcome in the first half, the second half provided (ironically, given the opponents) a chance at redemption for the Less Useful Mutants. Having managed to spill the ball and carefully set up a relay chain the turn prior, the team was a simple pickup, handoff and pass away from taking the match in the dying seconds. Getting all the way to failing the last (rerolled) 3+ catch felt like nuffle just wanted to kick me in the teeth, but that's XCOM Blood Bowl baby! Anyone know what an 0-11-0 season might mean for my playoff chances? :P