Player Team Of The Week 2  - By TomasT

How fast does the time fly? The last time I wrote PTOTW my team was 2200TV. Now they are 1600TV. Seems like yesterday, really. So we have 2 weeks of new season behind us and I am bringing you the new Player Team Of The Week. Now with the working title "TTs or GTFO". If you are not able to rake in enough TTs you will not get your players in here. Last week we had some newcomers here, both teams and positionals. What is it this week? Dive in. 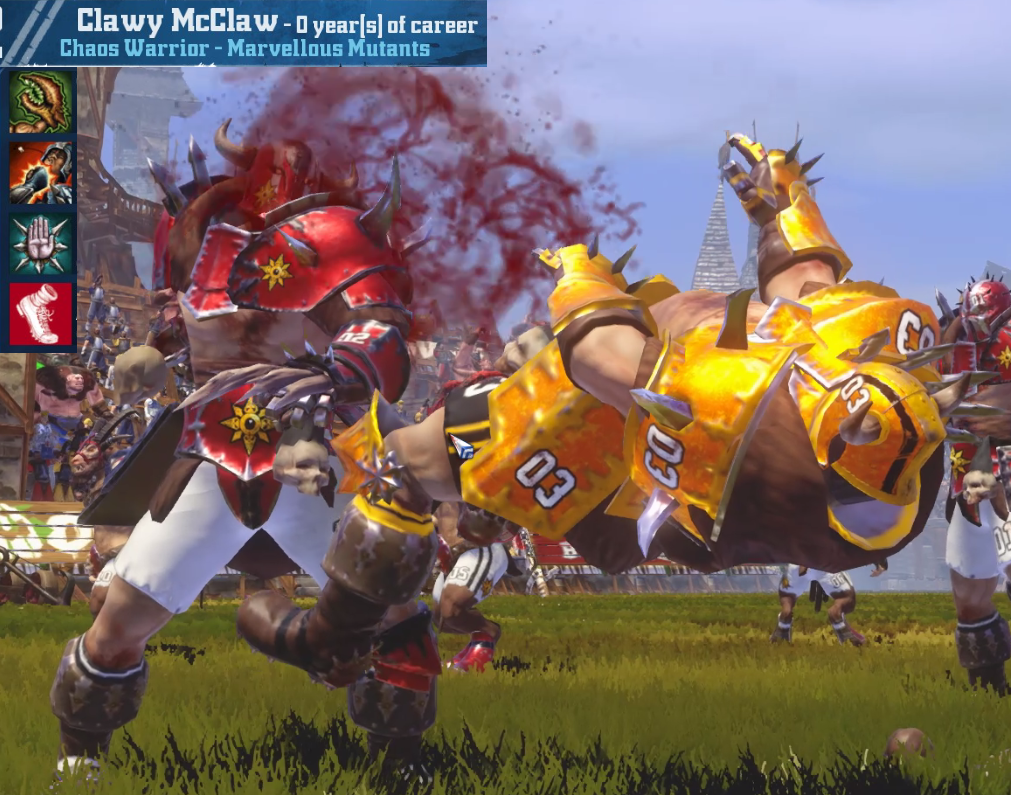 When Nuffle's Yeallow Horns met Marvelous Mutants chaos was to be expected. The game was standard Chaos build vs WFT is that team build. Admittedly Clawy McClaw, our number 5 this week, is one of the more ordinarily looking players of the team. No extra limbs, tentacles or tails like his mates. Just good old claw. However he is special as well with his plus movement. Looks like interesting team build that will blow up on high TV. However so far this season the mutants rock. And they have Clawy McClaw to thank for that as well. While he did not do anything unexpected liked 5 passes and catches in this match, there is one thing about his performance that stood up. He made 19 blocks. How do you make 19 blocks if you have 16 turns and no frenzy? I had to look at the replay and the answer is - you get 3 times Blitz for a kick off event against your opponent. That must have stunk for the Nuffle's Yellow Horns. However it was great opportunity for Clawy McClaw to do his magic. He conjured 10 armor breaks, casted 6 knockouts and avada kedavraed Block Guard Chaos Warrior. He must have broken his wand while casting the last spell as the appothecary was able to turn it to armor bust instead. 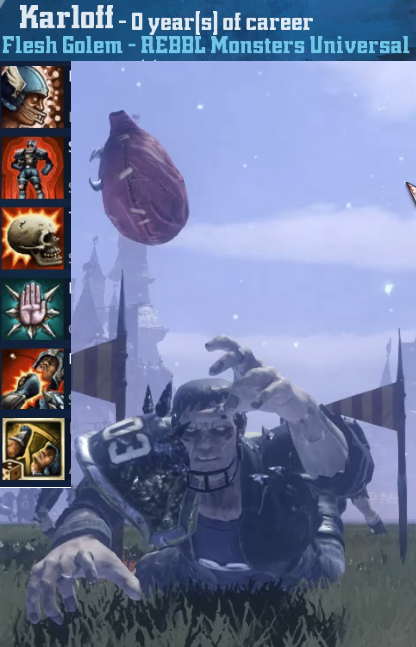 Karloff enjoying the first snow by sledging during his touchdown.

4th place is taken by another positional that we have not seen a lot of in the past seasons. Karloff is a nice example of Flesh Golem from a tax avoiding necromantic team. In his last match he reached the level 4 stepping over the corpses and mutilated bodies of yet another Dark Elf team. The bill was dead Witch Elf, dead blitzer and another 2 retired blitzers. MNG lineman was just a little bonus. Karloff himself played pivotal role in both deaths and another one of these injuries. What did he need to cause 3 casualties? 4 blocks and 3 armor breaks. Game of the lifetime right there. The dark elves herd got so thinned that Karloff was able to score one of the 2 Flesh Golem touchdowns of the game. This allowed him to level up and roll double. Pardon me while I go puke myself, disgusting. 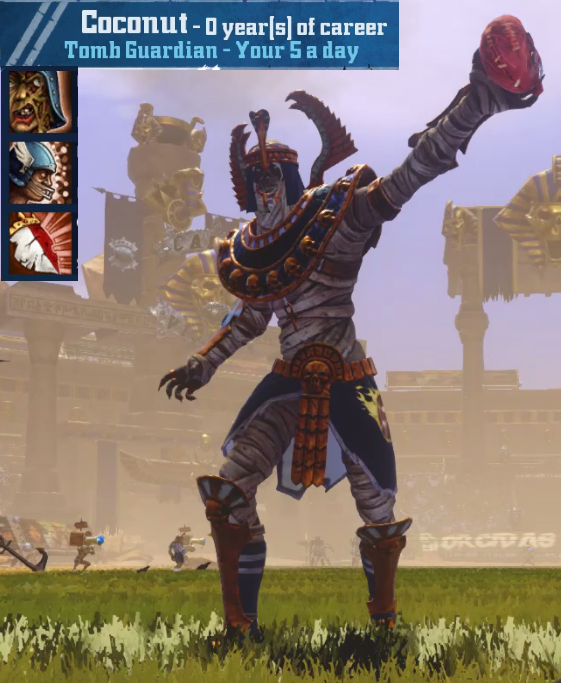 Coconut celebrating his first of many touchdowns to come.

Oh yeah!!! Last time we had a Khemri Tomb Guardian in here and this week we have another one. Is the Tomb Guardian the new Skaven Blitzer of Player Team Of The Week? When I mentioned last week that performance of the Tomb Guardian must have left the Khemri coaches drooling, this one went one step further. The coaches will surely (Coco)nut this time around. Coconut made just 5 blocks with 2 armor breaks but since the opponent wast Dark Elf team, race which is currently cursed in REBBL, both armor breaks resulted in casualties. One of the casualties was dead dark elf lino, obviously. If it was not enough the Khemri achieved such dominance on the pitch that coach asked Coconut to score. He caught the hand off with ease and there was no elf left around to stop him. For once Nuffle was not making jokes and granted the fully deserved MVP to Coconut as well. 12 SPPs in a match on Tomb Guardian. Beat that. 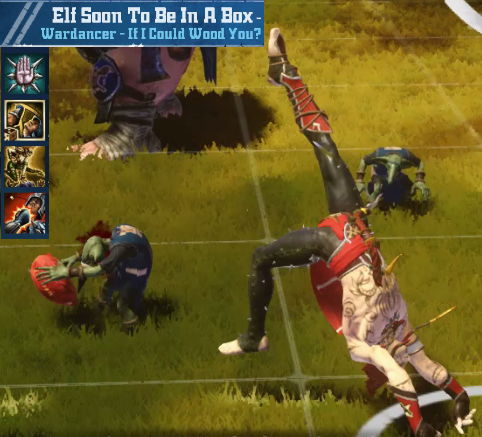 Elf Soon To Be I A Box relieving Oro from ball, and soul.

When Wood Elf team If I Could Wood You? met Bone Figher Boo Ogre the main strategy was rather clear. Elf Soon To Be In A Box already won Wardancer lottery and rolled Mighty Blow. So the name of the game was clear as sky - It's gnoblar hunting season. As main blitzer he made 12 blocks and achieved amazing 8 armor breaks. Ogres burned through the gnoblars faster than BleedingHippy through my team TV. The armor breaks resulted in 3 knockouts and 3 casualties including one gnoblar kill. While the Wood Elves won only 1-0 they had great start to the season with 1 win and 1 draw. On top of it Elf Soon To Be In A Box will soon be Elf Soon To Be Having Tackle. This will come handy in division infested with Chorfs an Khemri. /kappa 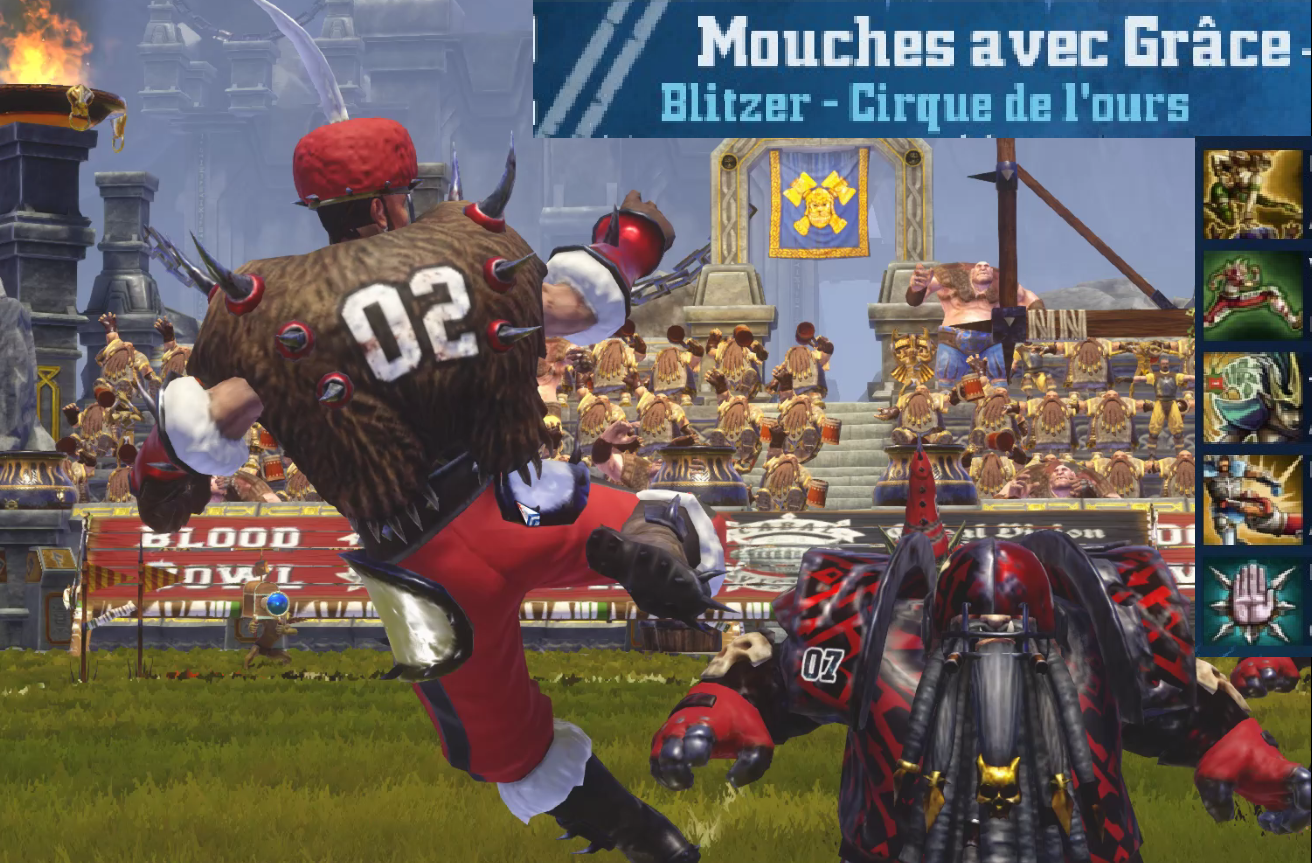 Mouches mistaking the chorf skull for a ball.

It is season of Kislev I have heard. There are few contestants for the REBBL champion throne. Krusader, SuperfedTV and MrShady to name few of the seasoned Kislev coaches. Now LewishM joined the fray with his rookie team and they were able to pull the 3-0 win against nasty, dirty, good for nothing Chorfs. But I disgress, it may or may not be related to my 600TV chorf induced diet. Mouches avec Grâce was the only blitzer of the team, so he had to pull the weight for whole team. And pulling he did. Not only he was able to score 2 out of 3 touchdowns but he shined as well in the "punch your chorf" category. His not exceptionally high 9 blocks resulted in extreme 5 armor breaks, 2 casualties and 1 knock out. The first casualty was the very first block on LOS and Chorfs had to use apothercary to save one of their own. The turn 1 faul injured another one. What a beautifull sight for my bitter Dark Elf heart. At least someone is able to make the chorfs suffer.