Player Team Of The Week 3  - By TomasT

3 weeks of season 10 are behind us and I would like to evaluate the new TT system. Our working title this week is "Milking those TTs". When I worked on it initially, I feared that it will either not yield different results than fantasy points or the results will be boring. And while there is always room for improvement I am pleasantly surprised with your player TTs so far. The most important success is that we featured some positionals that did not get their moments of fame in the past seasons, like Tomb Guardians and Flesh Golems. But the best achievement is that there was no God damned Skaven blitzer in sight so far. Until this moment about 57000 TTs were collected across 7266 players/matches which is about 8 TTs in average and our record holder is still the week 1 winner Pestigor My favourit things with 59 TTs.

As well I would like to thank everyone for their feedback and from next week on I plan to buff a big guys with negatraits a bit as a result, as they have less chance to succeed. Let's take a look who are the TTs grabbers this week around. 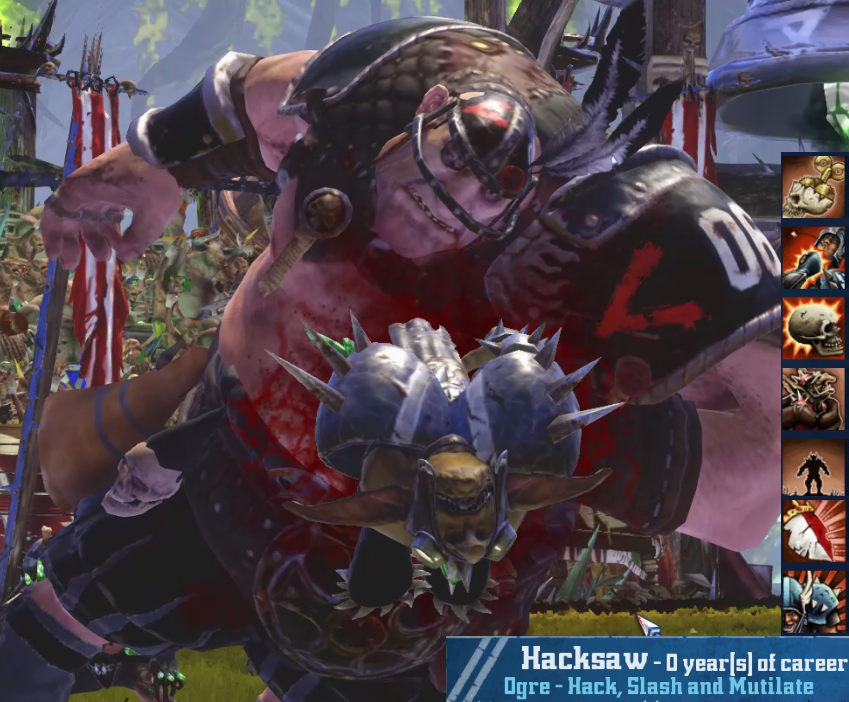 Amazing. An Ogre smuggled through on the Player Team Of The Week list even without me buffing them yet. It is only 2nd season for the ex-RAMPUP human team but the Ogre Hacksaw career is on great path as he already leveled twice. Despite the rest of the team is clearly abusing the performance enhancing drugs and somehow got to roster 4 agility 4 players, the results are not showing it yet. The team is strugling at the tail of the division 9 and thankfully to Hacksaw's preformance in the last game they finally scored the first point of the season by tying a game agaist Underworld team Sneaky Blinders. All Hacksaw needed to get on the list were 8 blocks that yielded 4 armor breaks. All of the armor breaks were removals. Lizzie Stark has been even removed from the mortal plane. 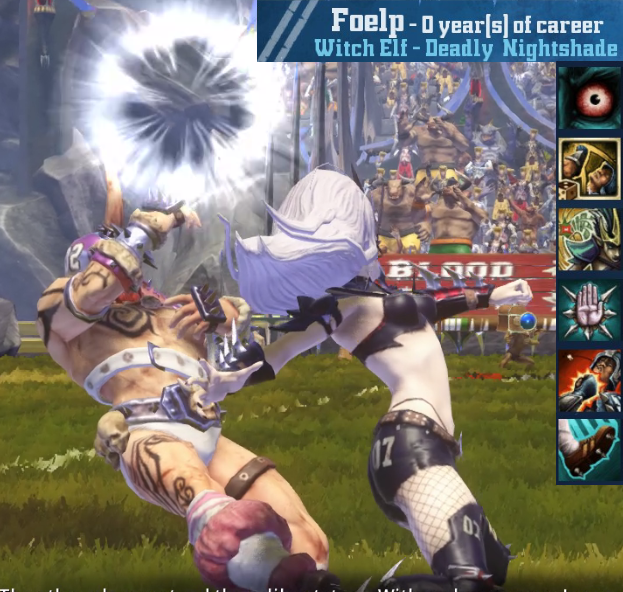 Foelp kicking Ragnar so hard that she opened portal to another dimension.

The Deadly Nightshade had the most terrible game ever. Not only they won just 2-1, made only 3 manatee asses, but the Witch Elf Foelp placed barely 4th in the Player Team Of The Week. If it was me I would reset the team and start fresh. I am just throwing little deadly (night)shade, we all love you Andy. Well, maybe not Jimmy. Another shade thrown! I am on fire! Throwing those shades as if I wanted to level up my joke levels. We all know I need it. I will stop now, sorry. Back to Foelp. Every Dark Elf coach dream that came through for Andy. Mighty Blow Witch Elf is fantastic piece and in the hands of fantastic coach it is one of the most dangerous pieces you can find in Blood Bowl. If only we could find some fantastic one here. (Help me, I cannot stop!!!) And she showed that last game. This barely clothed fantastic female was all hot over the half naked males with 19 fantastic blocks, so the 7 armor breaks against AV7 team feels slighly underwhelming. They resulted in 3 fantastic knockouts and one fantastic casualty which gave Dark Elfs enough room to secure the win. The game did not end 5-0 as the one they played 2 seasons back but every win counts. 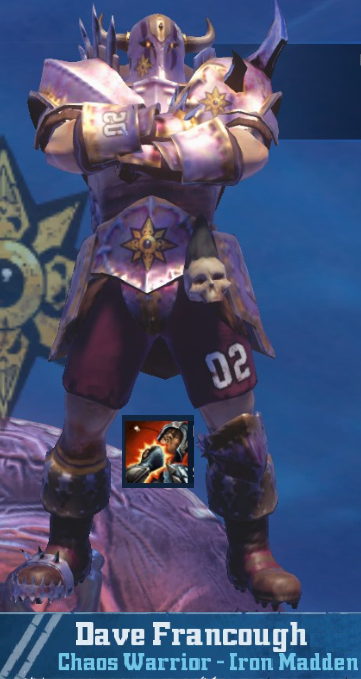 Footage of Dave Francough killing pro elf lineman was unfortunately eaten by redaction goblin. Guess who gets to be eaten next.

After few seasons in REL Gengar decided to return back to GMAN and lot of the coaches were relieved when his disgusting Khemri team was destroyed during shipping process. So he decided to rerol to Chaos because apparently that is what GMAN lacks. And his Chaos build is exactly what you would expect from Gengar. The one AGI4 goat must have been an accident. Everyone else has nice naked Mighty Blow and of course we cannot miss a Dirty Player. Such team is expected to be stuck at the end of the division for at least the first season and that is the case with Iron Madden. In the last game they were able to secure their first draw of the season where they rolled hot dice and knocked out 5 and injured another 5 pro elfs. 2 of them died and 1 was agility busted. Dave Francough himself knocked out 1 and killed another in 4 blocks and 3 armor breaks. That itself would not be enought to place here but Dave scored one touchdown making sure the team did not lose for once.

Lineman Aloe scoring 2 touchdowns against dwarfs. That must have burned. They should get some aloe for that. Oh, wait.

I am sure we had several Wood Dancers and Wood Elf Catchers on Player Team Of The Week pedestal but Wood Elf lineman is the first. Generaly when Wood Elfs meet Dwarfs it is not time for elfs to celebrate. Not when the Moist Owlettes met Heavy Hitters though. Those "heavy" hitters inflicted only 2 injuries and 3 KOs on the AV7 while the Wood Elfs answered with 3 KOs and 1 injury themselves. Bargain Boozers Emporium must have had some sweet sale. The injury was delivered by Aloe himself on top of scoring 2 out of 3 touchdowns. I asume, since Aloe was lucky to get Guard, the coach wants to put some safety skills on him as soon as possible. This game he was able to give him block and he is only 6 SPPs from Dodge. At least someone is alive and doing well on this team. 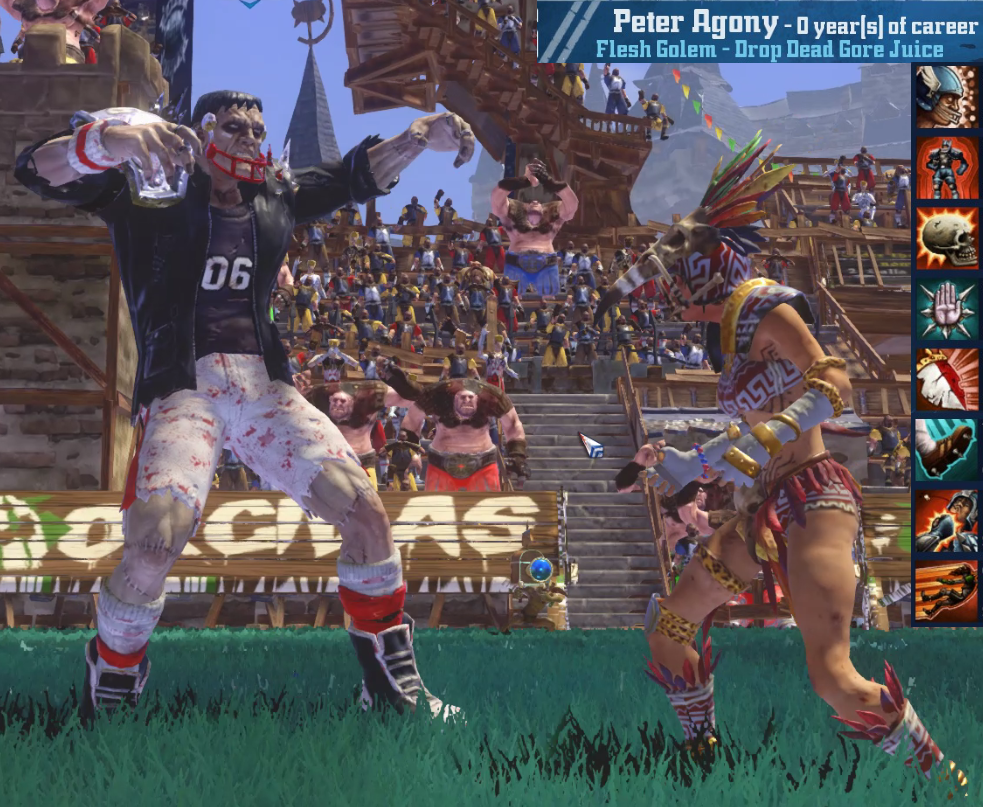 Peter Agony and his dance-off with Jane

Peter Agony grabbed the most drop dead gore juice TTs this week. And not just because he groped lot of amazons. I remember him from 2 seasons ago as a little golem with only Block, Guard and Tackle. He was already anoying at that time. Now with Mighty Blow and Grab he is a nightmare for any blogde piece with low armor that forgets itself standing in his surroundings. This week the unfortunates were the top GMAN Amazon team Rockomotive Gitstompers. Peter felt frisky after sighting such beatifull group of women and decided to ask 15 of them for a dance. For 10 of them this was a stunning experience. 3 of them were completely blown away by his dancing skills and 2 were not able to keep up with his agonizing moves and were incapacitated until the end of the dancing competition. The judges gave Peter and his group 2 points while the girls got only 1 for their effort. It was nice to see someone kick the behind of the amazon team that caused me the 2nd biggest TV trim of my team career. Thanks Peter.

Acknowledgement: I would like to thank majorbyte who polished and significantly improved one of the paragraphs.

The GMan Div 3A Precap LIVE on Twitch with Hubster & Kubusta