Player Team Of The Week 4  - By TomasT

Last week was a week of The Werewolf. We had 2 of them to reach the top positions in this leaderboard despite Schlice (not Sliceandice) nerfing them for Fantasy League. Bad doggos, bad. In another news this is the first time this season where fresh divisions took most of the slots making it much harder for me to write about fresh, yet to be renowned players. 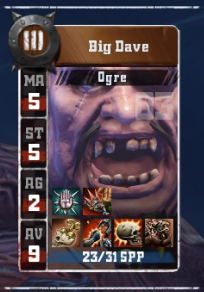 Despite being stuck at the and of the 8D leaderboard, The Bonehead Bunch is having their 2nd appearance in Player Team Of the Week this season. This time it is for Big Dave to enjoy his 15 minutes of fame. And rightfully so. Another Piling On piece on the team, but this one had the luck to roll double and take Block first. Piling On really did the trick as Dave broke armor 11 times in 11 blocks causing 3 knockouts and 2 casualties. Seems like Dave is going to be the primary blotzer of the team. Next they need to get som AGI+ Ogre so they have some semi reliable ball carrier and finally score the first touchdown for the season. 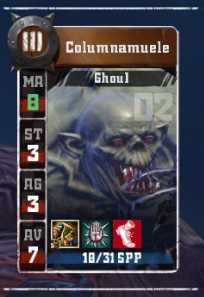 Apart from it being the week of The Werewolf it is clearly week of Mortimer Team as well with 2 appearances in the Player Team Of The Week. First of the players is the Ghoul Columnamuele, clearly a future casters favourite, thought still better that whatever Razta and Missuh came up with as far as names are concerned. He is nice Blodge ghoul with additional movement point and as such the main ball carrier of the team. But not only that. In the last match apart from scoring once while surfing skink simultaneously, he broke the armor twice in just 3 blocks with one knockout and 1 kill. Bear in mind the kill was a Saurus that blitzed Columnamuele and rolled double skull. Lizards were clearly not having the best of days. Mr. C on the other hand had a blast. 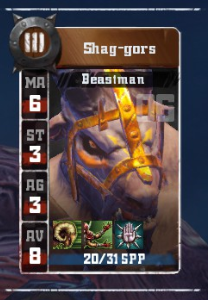 This is likely the most rookie player and most effective player ever in the this leaderboard (as he was skillless during that game). This is another case of a player that made this list because he was the one to do 1 of everything. He made 1 block that caused one armor break, then made 1 pass and 1 catch. Afterwards he did huge mistake by scoring TWICE and breaking his theme. Anyway this somehow meant his team beat the Undead 2:1 but who cares about that. ReBBL is all about memes. As such I need to commend his teammate Far'nogors for taking Mighty Blow and Claw as his first skills and becoming a faithfull follower of the Church of All Apple Pie. Embrace all the 1 in 9s. His team is on the top of division 8E so it worked out for them well so far. 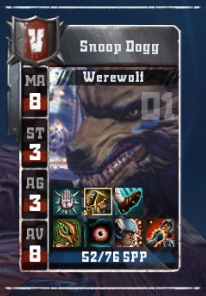 22 fantasy points is usually enough to warrant first place in Player Team Of The Week. This week it was not even close. Snoop Dogg is the first of the Werewolfs this week and he is exactly what coach expect of a good boy. Rolling double on first level means he is now Blodge, Mighty Blow and Tackle piece. Seems like his diet will consist of lot of elfs and rats in the near future. He made a typical high amout of blocks for frenzy player - 15 - broke armor 8 times and put 4 knockouts and 1 casualty under his belt. As he was really hungry for his coach approval he scored all 3 touchdowns of the match by himself. He is a huge ass(et) but needs to continue to deliver every week if the team wants to go to the playoffs. 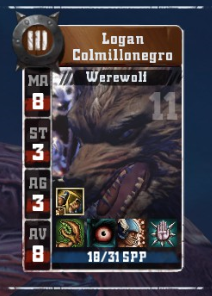 As far a I know this is clear record breaker in fantasy point collection in 1 match. Nerfing the Werewolves in fantasy league did not prevent Logan Colmillonegro to absolutely steal the first place this week by pretty much doubling the fatasy points of most other players. So what do you need to do to get 31 FPs? Hold your hats. He made quite expected 17 blocks for main frenzy blitzer and made only 6 armor breaks with one killed player. That by itself does not sound fancy but he surfed 4 players killing another one in the process. Sometimes your opponent does nor learn after first surf. And since most of his teammates were not worth a damn (apart Mr. C) he scored 2 out of 3 touchdowns and made sure his team won. He leveled and is now a Blodge piece, only the Mighty Blow is alluding him so far.

Can we break the 31 fantasy points record this season? I would very much like to see that. But please make sure you achieve that with player with easily pronouncable name. If Idhrenmaedhdraug'tigor or any of this fancy teammates makes this list it would be very sad day for my mental health. See you next time.