Player Team Of The Week 6  - By TomasT 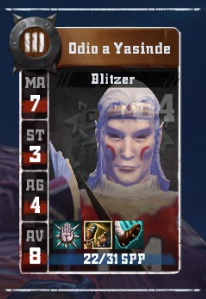 mmcnaughton4 clearly hates YASINDE (the player, not the coach, I guess) and he hates him so much that he dedicated his whole team theme to express his feelings towards him. The Spanish version of his confession pulled of Yasinde-worthy achievement though. Oido a Yasinde, while quite ordinary High Elf blitzer, were able to knock out 2 Undead players in just 5 blocks and 3 armor breaks. This helped the elfs to win the game 3-0 and Odio scored 2 of these touchdowns after catching 2 passes. I hope he has some agility stat ups in his future. His teammate and co-blitzer chose a different career path and turned into Big Guy. Ua inaina au ia Yasinde! is now STR5. I am sure lot of DIV8E sentiment is "I HATE Ua inaina au ia Yasinde!". 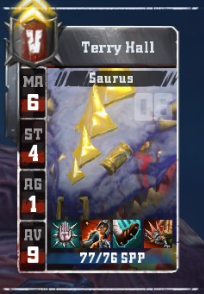 When I saw Terry getting 17 fatansy points I was hoping to see some dead elfs so I could use that old "died of dissing Terry" pun. However that was not the case so I had to force it on you anyway. Sorry for that. I replayed the game and Terry was more on his leathered ass than on the feet in the hope to remove as many high elfs as lizardly possible. And his efforts were rewarded. In 13 blocks he broke the high elf armor 14 times. It resulted in 5 knockouts and 2 badly hurts elfs. The lack of elfs likely meant that the Lizardmen were able to pull off unlikely draw in turn 16 and bring home the first point this season. Plus Terry got a new level. What shiny new skill is he going to get? Could it be thick skull or pass block? 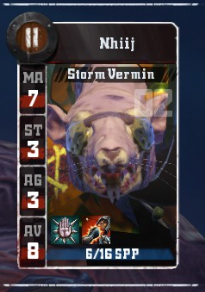 Skaven Blitzers are the type of players that can collect fantasy points right and left. However it is usualy after they get some kill skills going on. It is therefore nice achievent for almost rookie blitzer to get here. But apparently hunting gobos is Nhiij's favourite past time and that helped him rake in some points. Mighty Blow was effective and he caused 7 armor breaks in 11 blocks. 6 of those armor breaks were removals. 3 knockouts, 1 badly hurt and 2 that required funeral arrangements. It was just one gobo and 1 rat lineman though so it could have been worse (or better based on your view on dead rats). 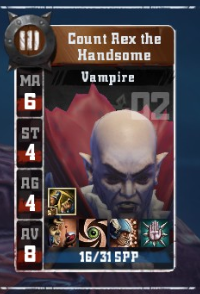 This is the first RAMPUP team/player that is featured here. They played one RAMPUP game before being sent to division 8B. I was initially cautious about sending them to divisions with teams having greenhorn matches under their belt but they are doing quite alright with 2-1-2 division record so far. In the week 6 game they could count on Count Rex the Handsome to win them the game. His results reminded me of Your Boss. Having no kill skills he broke armor 10 times in 10 blocks, against blodge Amazons, what dice is that? 4 Amazons were knocked out and one linewoman did not survive that. The pass and touchdown were just icing on the cake. 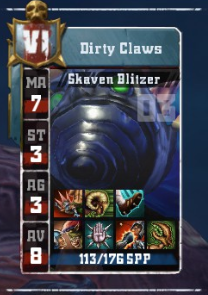 Dirty Claws held an competition with Cat from Definitely Not A Zoo last season about who will get the most appearances in the Player Team Of The Week. Cat won 4-2 that time. This season however they have not been featured here so far. Just this week Dirty Claws was finally able to get to this leaderboard and straight win it. The Undies are not doing well in division 2 and lost 5 games in a row but now thanks to Dirty Claws they were able to turn the last game into a win. Dirty Claws made 16 blocks with 11 armor breaks, knocking out one and injuring 3 ors, first badly hurting opposing team killer, then killing Black Orc while scoring touchdown and then making STR4 Mighty Blow Orc Blitzer miss next game. Those claws are dirty from that orc blood most definitely.