Player Team Of The Week 8  - By TomasT 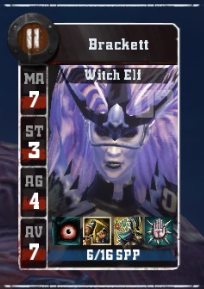 Witch Elfs are typical contenders in Player Team Of The Week. It is because they are very versatile and can step in every role on the pitch. Do you need to score? Witch Elf. Do you need to surf? Witch Elf. Do you need to kill? Witch Elf. Do you need some nice ass to look at? Ehm, this one is actually the new Runner. So maybe not all roles. However Brackett tried to do most of it and lot of it even at the same time. It took her 6 blocks to break the armor once, but that break has been tragic for a High Elf catcher. Apprently you do not need dwarfs for the 4 Stunned Dwarf Technik. Dead High Elfs do just as fine. Brackett made as well 1 pass and 1 catch and scored one of the 2 touchdowns. The team still has a very good shot at playoff and I would like very much to see them there. All the fresh DarkElf teams are clearly taking the same enhancement drug, as all sport Mighty Blow, Piling On, STR+ or Guard players. Looking forward to see them in next seasons. 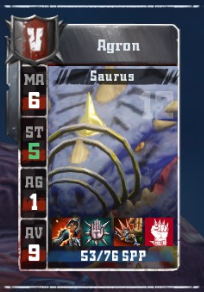 While I am not really fan of Lizardmen as a BB team, I had to admit that Agron is hell of a sexy fella. I have a feeling that he was featured in Player Team Of The Week last season but I am too lazy to search in the G-manual annals. Not my kind of annals. Too many ns. I deeply appologize for the immature joke but that is the best I can do. Agron on the other hand could do much better. At least in the hitting area. He is essentially big guy with Block, Piling On but without Loner. This makes it very hard for the opponents to bring him down and he has only been injured once in the last 2 seasons. In the last match he showed his magic tricks to buch of skaven, The tricks consisted of pulling 9 armor breaks from 12 blocks. Then transforming the armor breaks to 1 knockout and 4 casualties. As his final act he retired one linerat. The tricks clealy overhelmed the skaven as they eventually lost the game. 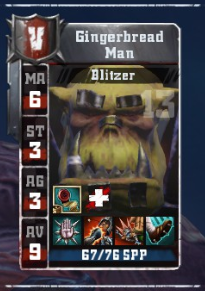 Number 3 is occupied by nice (and tasty) Orc Killer. Gingerbread Man has all the tools to hunt down those pesky rats and he did his part. Despite his team losing in the end, it was not because Gingerbread Man was not trying. 11 armor breaks in 11 blocks is quite nice record even for Piling On equipped killer. 4 of the rats were put into temporary sleep while another 2 gutter runners were not able to continue in the match as a result of Gingerbread Man's intensive care. One is even going to miss next game. It was just a rookie one so no real reason to celebrate for their next week opponent. Gingerbread Man killed 3 players and injured another 14 in since the season 8 but he needs to pump up his numbers if his team is supposed to have any chance to get the playoff spot. It is not all lost yet but it will require some miracle results. 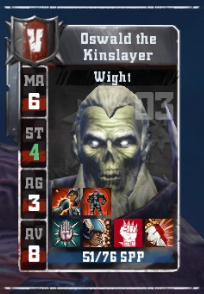 Oswald was a shining star in the match between the TOP division 4 teams. The result 2-0 for Nercomantics team resulted in the playoff hunt being even closer than before. Then Necro team pays their Flesh Golem taxes on time and in abundancy. Hence Oswald had to take the Flesh Golem duties on his shoulder. His first level was a STR+, then he was given Guard and Mighty Blow. He finished his Flesh Golem transformation after 5th level where he got Standfirm. In this last match Oswald made just 6 blocks but broke armor 3 times, knocking out his opponent on every break. Being able to make a pass, a catch (and not snaking it twice as certain PTOTW author) and scoring one of the 2 touchdowns brought him up to position 2 this week. 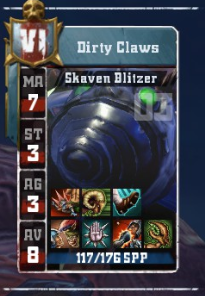 Beatifull. After Cat caught up with Dirty Claws last week in appearances, Dirty Claws had to one her up immediately. This was very unfortunate for the Amazons that had to face his dirty claw last week. When you break armor 20 times in 16 blocks something has to stick. Suprinsingly not much stuck. Only 2 KOs and 2 injuries were a little bit underwhenlming, but it was enough to win this week nonetheless. One of the injuries was just badly hurt, while the other was movement busted linewoman Jill IV. It was very interesting to see the appothecary to be used to save her in turn 12. There either had been 2 appothecaries in the play or Jill IV provides some non-Blood Bowl related services to the coach.