As we reach the end of Season 11 in ReBBL I’m sure there’s been many interesting and exciting milestones achieved by players, coaches and teams.

One that’s been of interest here in the Big O is the player Andrew G. McCabe. He plays for Nurgle team "Trumps Chumps" in Division 1. He’s played 59 matches and is the longest serving member of the team. He’s earned 61 SPP.

What? Did you say a Rotter?

Yes, he’s a Rotter and now holds the ReBBL record for most matches played by a Rotter and most SPP earned by a Rotter.
I caught up with the coach of Trumps Chumps “Yabby” to talk about his record breaking Rotter Andrew G. McCabe.

Road Warrior: Thanks for making the time to answer some questions. I know you’re from South Australia but what part?
Yabby: Adelaide, born and bred.

Road Warrior: Now I know what a Yabby is but we should help educate our foreign friends. What's a Yabby and how did you come to choose it as your coach name?
Yabby: It's a small fresh water crayfish. I used to play America's Army FPS back in the early 2000's. I was part of an all Australian Clan called [Recon]. Everyone in the clan had to choose an animal name as their handle. It was preferred, but not required for the animal to be an Australian native. So Yabby has been my online handle ever since. 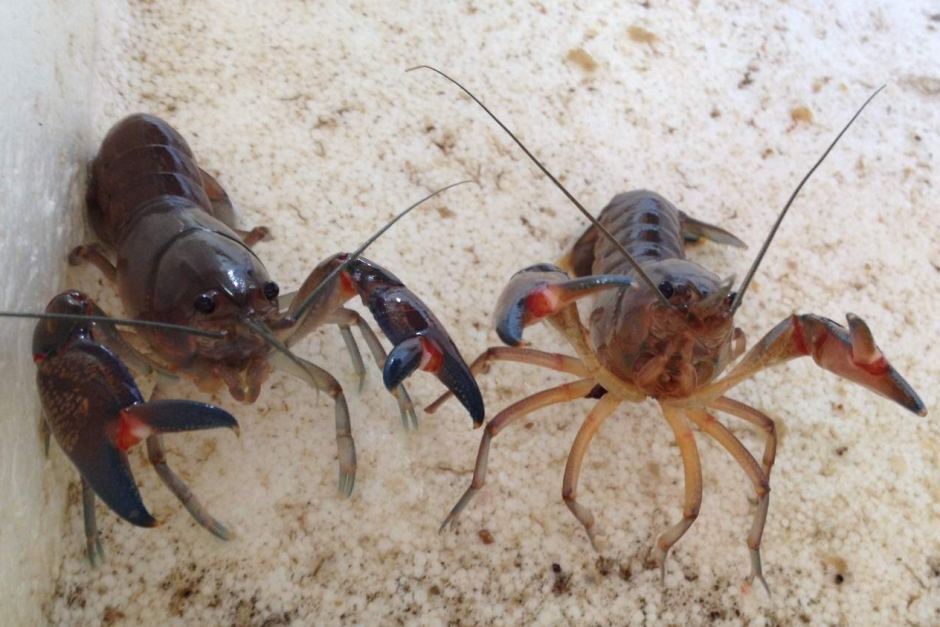 Yabbies are about the size of a large shrimp or prawn. Great eating!

RW: How long have you been playing BB? (in any format TT or PC)
Y: Never played TT and have no interest in it, I think I’d really struggle without the UI showing me all the chosen skill ups on the players. I played my first BB2 game in a private league organised by fellow [CO] clan coach Serpeant called the “Misfits League” back in October 2016.

RW: What season did you join ReBBL?
Y: According to the records it looks like I started in Season 6 with my Orcs, then skipped Season 7. Weird as I’m sure I ran two seasons with those Orcs! This appears to be is my 5th season (and my 4th as this Nurgle team). My Orcs team name was “ Yabby's ReBBeLs”. I also wanted to give a big shout out to Papa Nasty who unofficially mentored me via Discord PM for that season in terms of team development etc (i.e. I had lots of PO and f**k all Guard LOL).

RW: So what made you decide to roll Nurgle?
Y: I feel that in an eternal format, teams with Claw access and or AG4 seem to be best at higher TV. I enjoy elves but am not really up to “ReBBL” standard with them. I considered Skaven as they have both, but felt the “bash / control” game would be easier for me to be competitive, still being pretty new to Blood Bowl.
Nurgle seemed really good at the time with plenty of ST4 / ST5 plus DP and Tentacles made me feel they had more anti-Agility action than most teams.
With a few more seasons under my belt, I now feel Necro is the best bash / control team out there, as their TV is far less bloaty than Nurgle, their linemen have Regen rather than Decay which is worth it for a loss of 1 MV and 1 AG in my opinion.
Also the speed of Wolves and Ghouls gives you more options for quick scores (the 1TTD is far easier and scoring in 2 is a lot more achievable).

RW: Now let’s talk about Andrew G. McCabe. Was he part of your original team?
Y: Yes I’m 99% sure he was one of the original cast (the only surviving Rotter from that list). At the time of writing he has 59 games played which is more than any other player on my team (my other two “original cast members” have missed at least a game each for MNG).
RW: This Rotter lives a charmed life.

RW: 61 SPP on a Rotter is amazing. 10 x MVP, 1 x TD and 4 x CAS.
I’m sure you wish some of those MVP’s hand landed on Nurgle Warriors. Was there a game in particular that Andrew G. McCabe really earnt his MVP?
Y: There have been many games where he did awesome fouling into removals, but sadly the BB2 client doesn’t track KO’s or CAS from fouling. Realistically there were probably 2-3 occasions where he truly was the MVP and that was for foul based removals. There was definitely at least two matches where he got at least 2 CAS on important positionals and swung the match for me.

RW: A lot of people comment that he’s to bloaty and you should fire him? What’s your main reason for keeping him around? Is he the team's lucky charm?
Y: Absolutely, I had the same thing with Katie Walsh who was an original rotter, she never actually died, but ended up with multiple stat busts, so I fired her and immediately re-hired her as my 3rd Pestigor “Katie Walsh” reincarnated.
I’m emotionally attached to Andrew G McCabe and simply can’t bring myself to fire him, especially now he is the all-time record holder in ReBBL. I need to push his record as far as it will go, so he will be staying until he receives a ST bust or death.
He will be returning as my 4th Pestigor “reincarnated” once he eventually goes out in a blaze of glory.

RW: Let’s talk about his Skill choices. Here I’m trying to understand why you built him the way you did. So let’s talk through each level one at a time.

Level 2: Dirty Player - would seem to be first choice Rotter skill for most Nurgle coaches. Did you consider anything else at the time? How did you decide?
Y: I love fouling with DPs, far less keen on fouling unskilled, I like to have 2-3 DPs on my list. I also like to generally start with 13-14 men to allow a fouling game. Fouling is + EV and in some games it can massively swing the result when you get lucky. The thing is you can often remove 3 players per drive with fouling, but a player can only be sent off once. The team inflicting the fouls can chose to stop fouling if their bench is getting too low, but the team suffering the fouls can’t really do that much to prevent fouls with at least one or two assists.

Level 3: Kick - interesting choice as Nurgle being a rather slow team some coaches may argue it’s hard to use kick well. Why take kick? Did you consider block or wrestle at this stage?
Y: It’s not amazing, I often kick short and hope for a blitz, or that it will land in Tentacles (very rare for either). Where is has helped is when I’ve needed to score more quickly on my own drive and been able to place it deep, reducing the chance of my opponent pulling off a 2T or 3TTD. I have another DP that just hit L3 and I gave him block (also as I don’t need 2 kickers and am not planning to fire Andy!).

Level 4: Block - Now it’s really interesting as I’m guessing he’s survived longer than you expected. Was block the only choice? If he had rolled doubles would you have considered anything else?Were you concerned about bloat and did you consider firing him at this stage?
Y: Pretty sure when he took block, I was tempted to fire him, but I had no other DPs at the time so decided I needed to keep him. I lost 2 DPs in 2 consecutive matches early in my 2nd season and I reckon he hit L4 shortly after that. I figured block over wrestle, as I had a Wrackle Rotter at the time and also I prefered to keep him upright for increased mobility when fouling.

Level 5: Fend - is a skill I’m appreciating more and more in the current world of ReBBL where nasty frenzy and piling on pieces exist on many teams. However it’s normally used on important pieces like ball carriers or LOS pieces. So why choose Fend?
Y: At the time I took fend it was when I decided to sort of go for the record, but also to put him in harm’s way, so he could die a glorious death, as I knew I wasn’t prepared to fire him any more (except for a ST bust). I figured Fend might be quite annoying after playing a match against either Serj or Djoolyurn last season and getting really irritated by several block fend zombies messing up all my glorious plans to do heaps of 2D.

Level 6: ??? - We’re not counting our chickens but he’s on 61 SPP and only needs 15 SPP to level. Should he make it what would you choose on a normal roll, double or stat increase?
Y: Probably Tackle, as I lack tackle. I’d pass on any Stat increases (maybe I’d keep +MV). On a double, I might take Sneaky Git just for additional meme value on an already bloated and much maligned piece

Thanks again to “Yabby” for taking the time out to answer all these questions and tell us all more about Andrew G. McCabe.

Best of luck over the last round of S11.
Cheers
RW

Special mention goes to Atomex over in Rel who has a Rotter that is looking to challenge Andrew G. McCabe.
Cry’mulgor has currently played 51 games and earned 60 SPP. He’s ST4 and AG4 with Block and Kick Off Return. Wow!
The previous record holder was The Crippled with 54 games and 27 SPP who was coached by Weravem in Gman who sadly did what most Rotters do and died.

So all 3 regions have contributed a Champion Rotter in recent years. 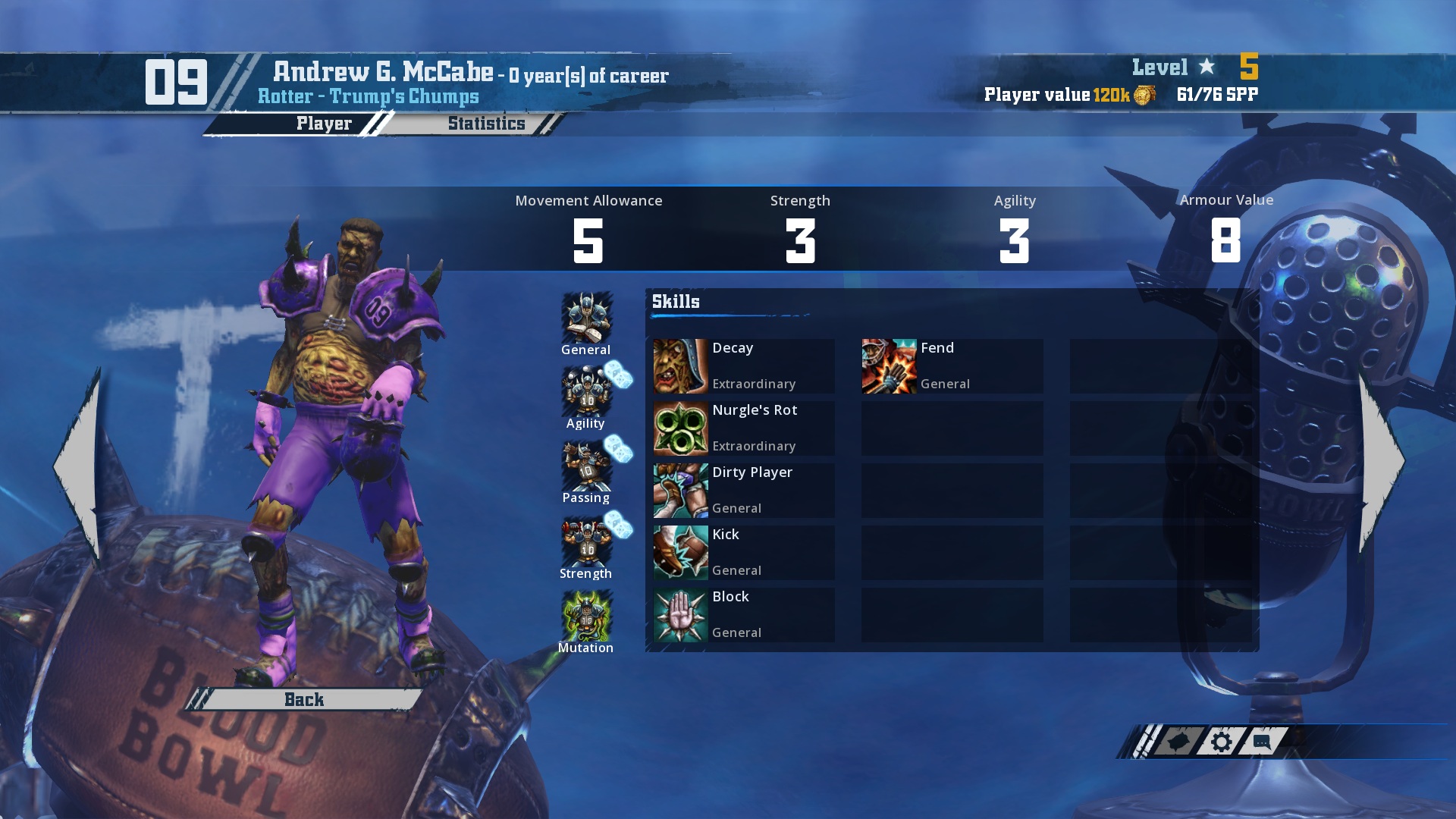