Warning week 3 stat attack imminent. Welcome to the new and improved GMAN 4D weekly stat update. The statistical loving halflings have been out in force watching all of the week 3 matches from GMAN 4D. Before we get into the numbers the halflings have an announcement. The halflings would like to give an award to the Teenage Ninja Rats for the quality of the food at the Plague Pool stadium. They especially liked the cheese based half time refreshments.

Now with that public service announcement out of the way lets look at how the teams are shaping up. The TV of the teams in the league once again went through some changes this week. The mean TV of the league dropped from 1612.14 to 1597.14. This is still higher than it was in week 1 so some growth is happening at least. Is week 2 going to be the high point for the mean TV this season?

Although the mean has dropped the median has gone up from 1625 to 1630. This small change is interesting as it implies the change in the mean was due to a large drop in TV for a small number of teams whilst the majority of teams maintained or increased their TV this week.

From the high of 19 TDs last week this week the scoring dropped back to a more sedentary 13 touchdowns. Last week’s high scorers, The Last Caress, had a decidedly average week this week scoring 1 TD which was the median number of touchdowns scored across the league. The team with the most touch downs this week were Da Happy Suns who scored 3. 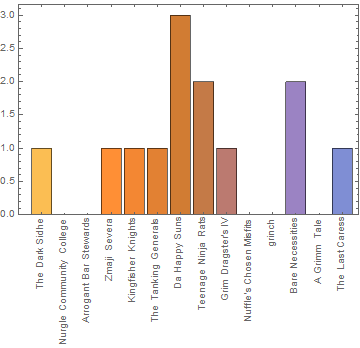 The passing stats this week saw a drop off from last week. This week had a total of 8 completions with a mean of 0.57 completions per team. The high elves once again lead the way with most completions. Looks like the Arrogant Bar Stewards are determined to prove that no other team passes like a high elf team.

On the bash front there were 588 blocks thrown, this is an increase of 115 from the previous week. The norse of Zmaji Severa threw the most blocks this week accounting for 12.2% of the total blocks thrown by the teams this week. Truly the naked men of the north demonstrated the advantage of frenzy in getting extra hits in. 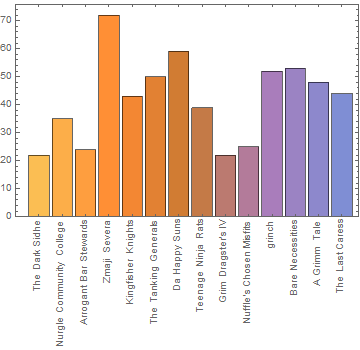 Despite the huge number of blocks this week, every seemed to have brought better quality armour onto the pitch this week as there were surprisingly few KOs and casualties. Only 28 KOs and 21 casualties came from blocks this week a significant drop from previous weeks.

Even more worrying is the massive decrease in kills this week with a drop of 57.1% in the death rate from last week. A pitiful 3 kills and a significant drop in casualties, what is the league coming to. Hopefully the teams will remember why the game is called blood bowl next week.