Stats About Playoffs! Edition 3!  - By Chabxxu

Hello everyone! We're back for another round of "Who's performing better in this season's playoffs!". I know the article's a bit late, but bear with me, real life can be busy! Without further wait, let's jump right into it!

The round of 32 was a bloodbath. No questions asked. Even if there was half as many games played, it feels like dreams(mine) were heavily crushed. Kislev, Skaven and Undead all saw their last representative take the early door into retirement and oblivion. Better luck next season guys (not really, I only cheer for Kislev at this point. Call it writer bias). A few races are also now down to their last representative as well: Chaos, Chaos Dwarves, Dwarves, High Elves, Khemri, Necromantic, Orcs and Vampires all only have 1 team left in play. With all the weight of their race on their shoulders, will they manage to bring the cup home? Or will Dark Elves (3), Lizardman (2) and Nurgle (3), with their multiple coaches still in play, have a better shot at winning the whole thing? 4 more weeks of action to find out! 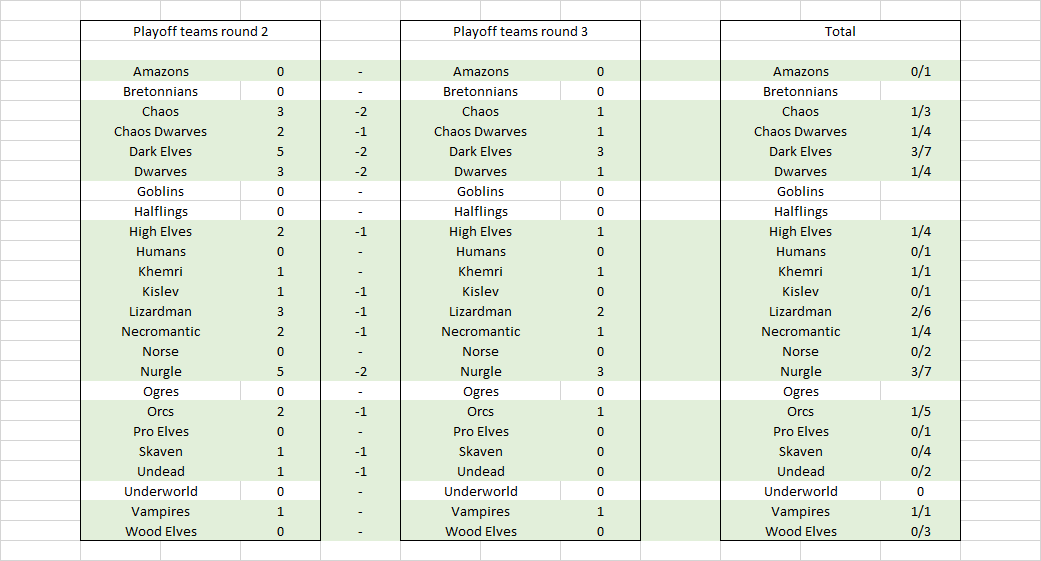 Now, about regions! One of the fun things about playoffs is to be able to cheer for your region even after you are eliminated, so you can brag to BigO and Gman that Rel is the best and will always be the best! Wait. Writer bias once again. But hey, it's true! Prove me otherwise! Back on topic.... When I saw the stats from the round of 32, I'll admit I was abit disapointed with Rel. Only 5 guys left?! That puts a lot of pressure on them. But then I realized that Gman and BigO also had lost about 50% of their games last round. So I guess the advantage Gman has is simply because they had more tickets (THANKS METAL!). Very exciting few weeks coming up! Will BigO finally win something? (everyone knows that won't happen)

And finally, divisions! My biggest surprise here was to see seven division 2 teams lose in the second round, while only 2 fresh teams lost. There is the same amount of 1 season teams in playoffs right now as there is of div 2. Find the mistake... Otherwise, the teams are pretty spread out in divisions, with most divisions having 1 or 2 representative!

Sippy Cup was also very bloody for a few races this week. Bretionnians and Nurgle both lost 3 teams, while Dark Elves and Lizardman lost 2. That means that Bretonnians, Kislev, Orcs and Wood Elves will not be winning the Sippy Cup this year. The most impressive race in this post-season tournament is clearly Chaos with still 4 teams in play, out of the 16 teams left. That's 25%. Murderfeast is too good I guess! Will someone be able to stop them? Or will we see a Chaos vs Chaos final? Damn, that would be bloody! 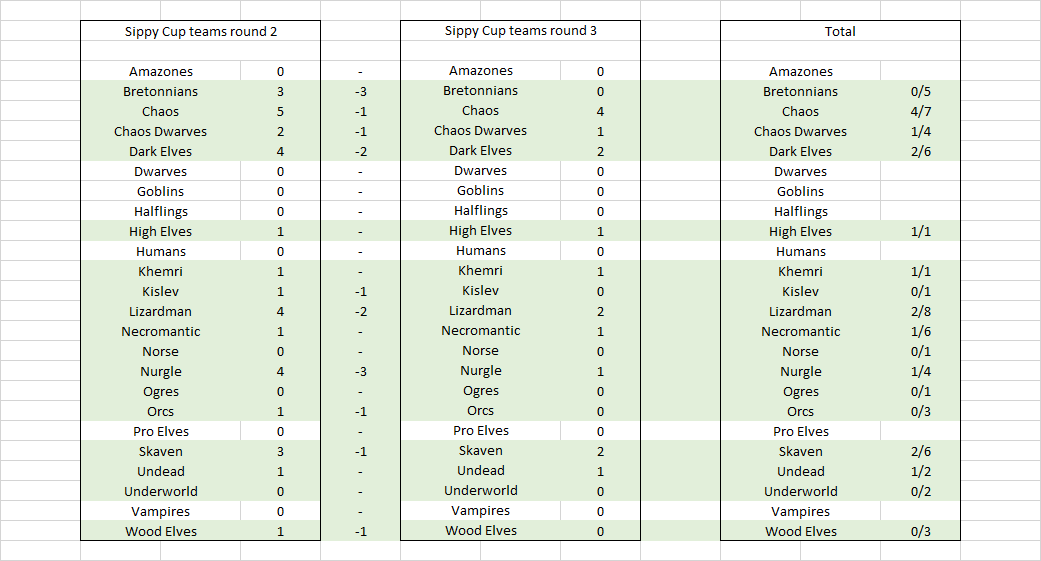 What. A. Week. For. Gman. Holy! Gman only lost 3 games total in the round of 32! That puts them at a big 9 teams left out of the 16 that are still in play. The region is in a very good spot now to bring it home, although that means that there will be a few Gman vs Gman games in the round of 16, which could cull the herd a bit... we'll have to wait a few days to find out! On the other side, it is not looking good for BigO, with only 1 team left in play, and that being a fresh team as well. Will he survive having the hopes of an entire region on his shoulders??

Division 1 teams are OUT! All the three division 1 teams that were still in play lost last week, meaning that Div 1 teams are weak (right?). Was it a lack of skill? Or simply a lack of motivation, since they couldn't go higher than div 1? Your guess is as good as mine.... but I really hope it wasn't a lack of motivation. This round also saw the end of the minor's champ, and a bunch of fresh teams too. Here's to hope a one season team wins it and goes to div 1 to show the old guys how to play! 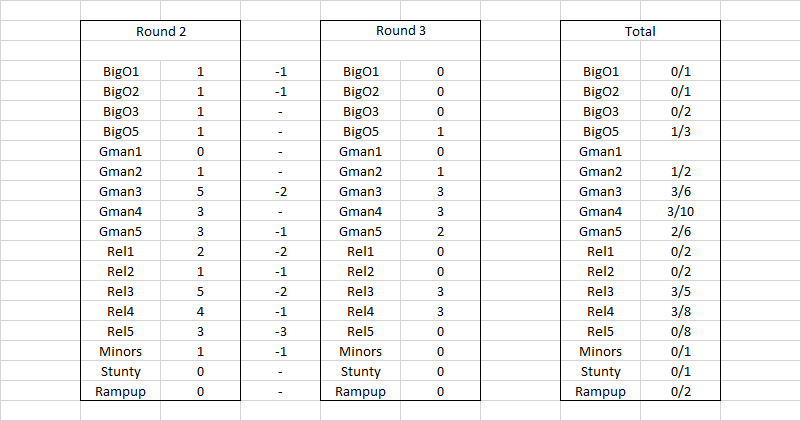 Hope you guys enjoyed, and I will see you all in a few days with more stats about the round of 8! Do leave some comments below!