THE CHEESE IS BACK, BABY!  - By Troukk

Let me tell you the story of Cheesetactics Mk.II. An orc team that rose to glory by reaching REL1, then was relegated twice (and barely avoided a third relegation), and now is in pole position to join the ranks of the most elite division in REBBL once again:

In fact, it was kind of a running joke that Cheese would continue to be relegated back to rookie division.

So what happened? Did he focus on development last season, to make sure he could take this one by storm? Not really. In fact this is what his team looked like before the beginning of the current season:

To be honest, most of us at The Tooth Exchange thought he was insane to keep these beat up boys. Just look at those niggles! 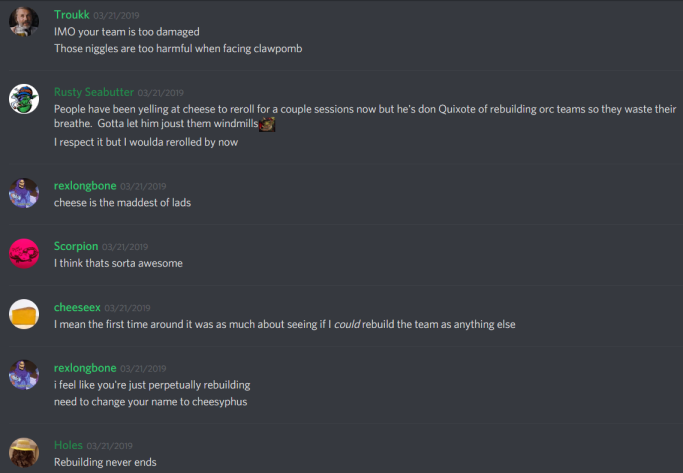 And yet this green coach persevered. If he was going down, it was going to be on his terms. But he didn't. And now, after defeating Dranar's Dead Wrestler's Society in a fantastic match, Cheese has secured his place in playoffs and is the most likely winner of his division! 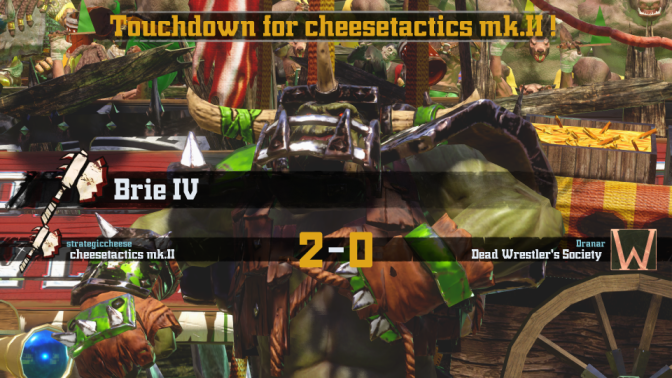 In a REBBL NEWS exclusive, we managed to talk to Cheese for a minute after tonight's big match. Here's what he had to say:

So many people were telling you to reroll, why did you decide not to?

I was very close to rerolling. I went into the post season and decided if I couldn't pick up at least 2 guard I would reroll. I got the guard and decided I had the bare minimum needed to play the team

Did you think you'd be fighting for the top spot or did you see this as a rebuilding season?

I came into the season considering it a rebuilding season for sure. While I'm always trying to win games, I didn't think it was realistic to expect top place performance from a 2k orc team with 3 guard

Your presence in REL1 is guaranteed at this point. What do you have to say to your future division mates?

I don't plan to get kicked back out anytime soon

And there you have it folks. If Cheese has taught us anything this season, it's that a team is only over when the coach says it is! Unless you get fired like this loser.