The Lone Gunslinger  - By Road Warrior

As we reach Season 11 in ReBBL there's one coach in our league who holds a unique honour. That of the only coach to take a Human player to Legendary level.

The player I speak of is John and the coach is none other than that jolliest of Scotsman "The Richest Tea".

I caught up with Tea recently to talk about his star player and his imminent return to coaching Humans in ReBBL.

RW: Thanks for making the time to answer some questions. I know you’re from Scotland but what part?
TRT: I’m from the west of Scotland, close to the city of Glasgow.

RW: How long have you been playing BB? (in any format TT or PC)
TRT: I started playing BB when BB2 was just coming out. I played in the pre-order beta where we only had 4 races to play at that time.

RW: What season did you join ReBBL?
TRT: I joined in Season 5. I was meant to join in Season 4 but Metal forgot to tell me to sign up until it was too late to join!

RW: Were the OOMIES your first team in ReBBL?
TRT: They were yes, they were my first team I had played in any private league.

RW: You played Ogres for a while and are now returning to Humans. Why come back to Humans?
TRT: I played Ogres for 2 reasons:
Firstly, I said on the ReBBL Alliance podcast when LE was announced that I would play a season of Ogres when they came out, so I wanted to keep my promise.
Secondly, I wanted a break from playing competitively and wanted to give Ogres a good go without having to really worry about winning games or worrying about playoff spots.

RW: Now let’s talk about John. A Human blitzer with 190 SPP.
Stat line: MA7 ST3 AG5 AV8.
Skills: MB, +MA, +AG, Tackle, Guard, +AG.
Injuries: -MA and a Niggle
The only Human player to reach legendary level since records began back in Season 6. Was he part of your original team?
TRT: He was one of the last 4 or 5 remaining original players on the team when I retired them.

RW: Do you remember what season he hit Legend?
TRT: I believe it was season 8, the last season the Oomies had run in Gman Division 1.

RW: Must have have been an amazing feeling getting him to Legend. Do you recall much about the game that he levelled to Legend in?
TRT: I think it was against Dark Elves, he had 3 SPP to get so the choice was simple: The old Oomie Wombo-Combo. This is the classic play between long time teammates, John and Wilfred. Wilfred picks up ball, Wilfred throws ball to John, John catches ball and runs the hell away into the endzone. I don’t think the team won that game, it may have been a draw. I wish I kept the team record somewhere so I could look back and find it specifically, so I’m having to rely on memory from a year or so ago.

Note: Wilfred is Teas old AG5 thrower who now plays for The Carroburg Comets in the Big O and is approaching Legendary level himself.

RW: At what stage did you retire him?
TRT: He had received a movement bust in Season 6 to Hudd’s Lizardmen team that he was playing at the time, but I decided to keep him as he was still AG4 MA7. He received a niggling injury against Vikingkop’s Chaos in Season 8, which I then made the decision to let him go.
He earned that retirement.

RW: John has an amazing stat line and selection of skills. Did you have a plan in mind for him at the start?
TRT: John was a strange one to level, he sorta got a bit of everything. He started with a +MA and MB, so I had intended for him to be a faster blitzer who could snipe off people with the extra range, maybe considering frenzy later on cause of that.
Then he rolled +AG, so he changed again, he became a receiver and goal scorer, but was also not really rolling anything but normals, so he got some utility skills like Tackle and Guard to make him more versatile.
Then on his legend level, he decided to roll another +AG, so i had to take it!
The rest of my blitzers were built normally or more standard. One was a removal player (POMB, Tackle, Pro, Jump Up) and the other two had Guard, MB, Tackle and one I think had Frenzy too. The more standard way they were built made it so i could use John in the way I wanted him to.

RW: So let’s talk through each level one at a time.
Level 2: Mighty Blow
Guard or MB seem to be first choice blitzer skills for most Human coaches. Do you have a preference? How do you decide?
TRT: It depends. I like as a rough guideline to give 1 MB and the rest Guard at 6 SPP.
It just allows you to be able to compete with most other teams you might face with having a good amount of Guard to deal with higher ST teams, and then a removal player to help with dealing with more AG players or lower AV players to give you an advantage.

Level 3: +MA
RW: An interesting choice as blitzers already have MA7. Why take +MA? I’m guessing this was not a double but do you remember? Would you take +MA over the double? Why?
TRT: Honestly, I took it because it looked like it would be fun. It wasn’t a double roll, so I couldn’t take Dodge or anything like that, so I went with the fun option of +MA.  I put fun over practicality or usefulness.

Level 4: +AG
RW: Now it’s beginning to get really interesting as he’s becoming your not so typical blitzer of MB, Guard, Tackle, SF etc. Why did you decide +AG?
TRT: At the time, he had MA8, so I thought that AG4 was a great idea for him as he already wasn’t so typical a blitzer but also it was another fun choice as I hadn’t really got to use AG4 players before so I really wanted to try it out!

Level 5: Tackle
RW: Why tackle? Was the team in need of tackle or was he shaping up to be a more mobile killer with the extra MA and AG to dodge away to blitz? Were you tempted to take Sure Hands or other skills they may utilize his +AG?
TRT: I gave him Tackle because I only had 1 Tackle at the time, since my other blitzers were not really doing much apart from getting killed! So I needed another Tackle player. I didn’t think about Sure Hands because I had a thrower with Sure Hands built in, so why waste the SPP and TV on it here. John never rolled any doubles so I was limited to regular skill choices in that regard.

Level 6: Guard
RW: Why Guard? Now he looks like a real allrounder capable of doing a bit of everything. Was that the intention?
TRT: Humans like Guard, I like Guard, John gets Guard. Can never have too much Guard!

Level 7: +AG
RW: Did you struggle with this last skill choice? Or was it always going to be +AG? It’s often hard to turn down Nuffles favour.
TRT: He deserved the AG5, and coupled with an AG5 thrower, it was too hard to resist!

Thanks again to “The Richest Tea” for taking the time out to answer all these questions and tell us all more about John. Best of luck in S11 and your return to coaching Humans.

Will we see a version of John 2.0 emerge, only time will tell.

Screen capture below of John at retirement in Season 8. 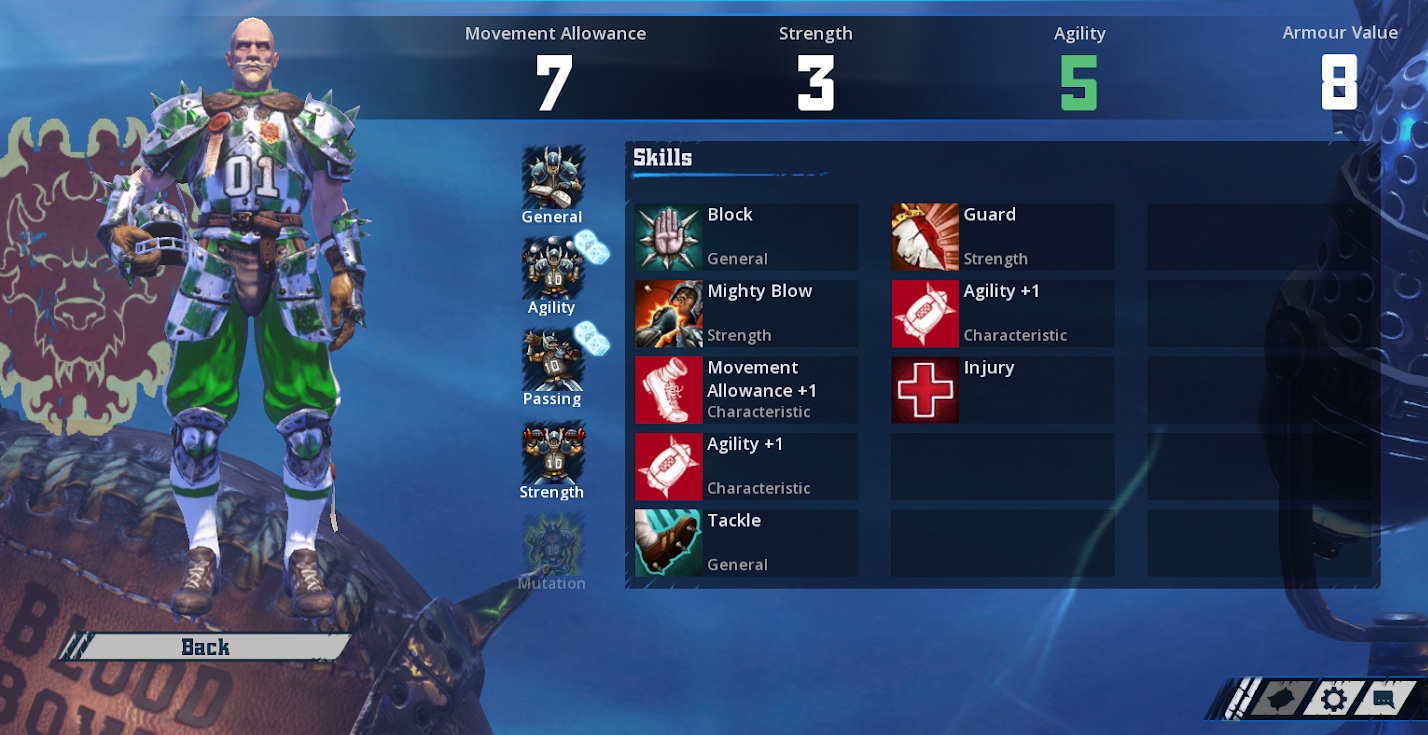 I love it. I look forward to you interviewing other famous players. - Ledeas

I love it. I look forward to you interviewing other famous players. - Ledeas